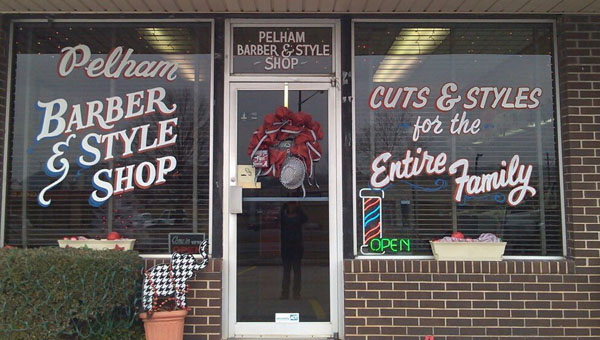 Pelham Barber and Style Shop owner Donna Catrett celebrated 30 years in business on April 4. She has owned the barbershop on Pelham Parkway since 1984. (Contributed)

PELHAM—Although hairstyles have changed since 1984, Donna Catrett and her Pelham Barber and Style Shop have remained a constant in Pelham for the past 30 years. Located at 3075 Pelham Parkway, the barbershop celebrated its pearl anniversary April 4, marking 30 years in business.

The milestone went largely unmarked because as Catrett said, “I really hadn’t thought about it.”

Catrett’s career at the barbershop began almost by chance while she was still a student at Alabama State Barber College. The pervious owners came to interview a classmate, but when they saw Catrett’s work, they changed their minds.

“They chose me instead,” Catrett said.

Catrett began working fulltime at the barbershop in 1983, and in 1984, she bought Pelham Barbershop from its former owners.

At first, customers were wary of a female barber, Catrett said.

“There were a lot of men that never had a woman cut their hair before,” she said. “Some would walk away, but others would come in and keep coming back.”

In her 30 years of cutting hair on Pelham Parkway, Catrett said she has developed “a number of regular customers.” She has also seen a number of unusual hairstyles over the years.

“I do flat tops, a few mohawks now and then,” Catrett said. “A few years ago people started asking for little lines cut in their hair, and one even asked for zig-zags.”

Catrett now runs the Pelham Barber and Style Shop with her daughter, and after 30 years has no plans to put the clippers down any time soon.

By GINNY COOPER/Staff Writer MONTEVALLO—Margaret Wrinkle was born in Birmingham during July of 1963, just months before the Sixteenth Street... read more