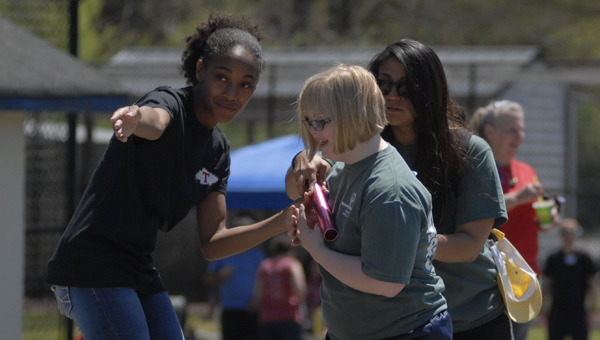 CALERA— More than 280 athletes took to the sun-splashed field at Ricky M. Cairns Memorial Stadium in Calera to participate in the Shelby County Special Olympics track and field meet April 10.

The event saw students from 36 different schools, along with senior participants from the Mitchell Center in Calera, competing in various track events including running, walking, wheelchairs, and adapted bikes, throwing and jumping activities.

Valinda Pate, an adaptive physical education teacher with Shelby County Schools (along with being the coordinator of the event) said the event was a complete team effort.

“We go to each school and have pre-trials,” she said. “We take their times and put them into different heats. The City of Calera (helps) us tremendously. We have over 100 volunteers working.  Thompson High School’s track team (came) to help us run the track.”

While many of the volunteers were high school students from Shelby County, there were a few that were returning to the event. Volunteer Chris Oyer said the atheltes keep her coming back each year.

“I’ve been doing Special Olympics for 32 years,” she said. “I got started because (they) needed someone with a big enough voice to announce. I just kind of jumped in and did it.”
Oyer said the joy the event brings the athletes was the reason she continues to volunteer.

“This is the highlight of their year,” she said. “Even when they come in last place, they are so excited. That’s what makes all the work worth it.”

Athlete Noah Bunn, 13, said he enjoys many aspects of the event. A participant in the softball throw and third-place finisher in the 100-meter dash, the Calera Middle School student said there was one part of the meet that really stood out to him.

“Everybody cheering for me, I like that part” he said. “(And) getting together with my friends. (It makes me feel) happy. The sun is warm. It’s warm out here.”

Noah’s father, Chris, said the response from the crowds stuck with him as well.

Pate said that at the end of the day, the response of the athlete was all that mattered.

“We try to make sure that every kid can compete in at least one event while they’re here,” Pate said. “The smiles on their faces, that’s our reward.”