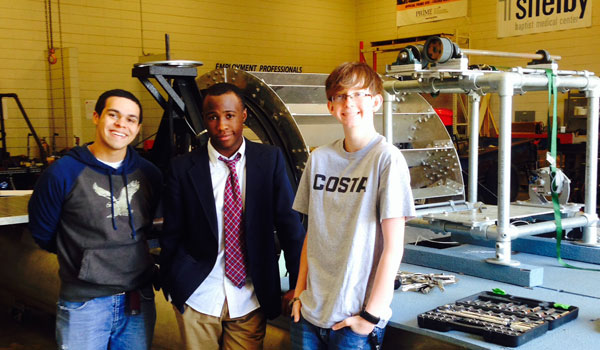 From left, Jacob Goldberg, Christian McDonald and Alex Miller in front of the hydroelectric power plant the class designed and built (Ginny Cooper/For the Reporter)

CALERA—Brian Copes’ engineering class at Calera High School is at work again, this time creating a hydroelectric power plant that will provide a reliable source of electricity in Honduras.

“Basically, you use the belt pulley to turn the alternator and the alternator charges batteries, which can be used for power,” Alex Miller, a tenth grader who has been working on the project, explained.

The group also raised $4,000 to the local school build add rooms to allow them to offer both middle and high school classes, and will take a basic utility vehicle, which will serve as a school bus.

Copes said the students’ efforts to help the school stemmed in part from seeing a need during their 2012 trip to Juitapa, Honduras.

“The very first high school student graduated in 2012,” Copes said, and cited the need to bus into a bigger town as one of the reason many students do not finish school.

The students also designed and built 18 prosthetic legs and a prototype of a prosthetic arm, which they will fit to amputees during the trip.

In 2012, Calera students also fitted 14 amputees and delivered and built two utility vehicles, one of which is used as an ambulance by the medical clinic and the other used as either a plow or a fresh water drill.

Christian McDonald, a senior at Calera High School, has been working with Copes since the seventh grade. McDonald went on the 2012 trip to Honduras, and will be returning this year as well.

“It was a life-changing experience,” McDonald said of the 2012 trip. “The best part was fitting a patient, and hearing their story. We had people travel for days just to come to us.”