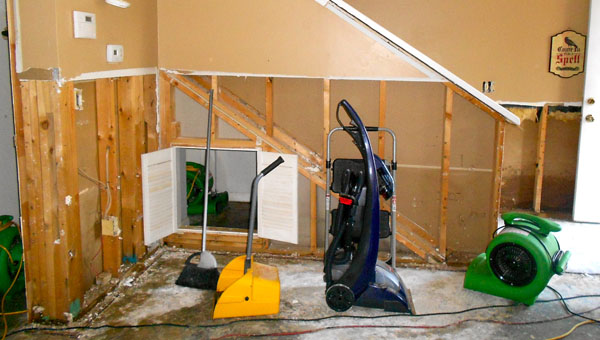 Workers have had to remove water damaged wall from the ground floor of Kim McTune and Heather Delander’s townhome after the April 7 flooding. (Reporter Photo / Molly Davidson)

PELHAM—Imagine waking up to find water rushing into your home. It sounds like a nightmare, but this is exactly what Chandalar Court resident, Kim McTune, discovered when she went downstairs at 6:15 a.m. on April 7.

“I walked downstairs and water was coming in the front and back doors,” McTune said. “It just kept coming in. I realized I couldn’t get out and I was trapped.”

By the time McTune was rescued by the Pelham Police Department, around 11 a.m., she estimated there was more than two and a half feet of water filling the bottom floor of her townhome.

Although she made it out of her home, McTune’s nightmare had just begun. Floodwater receded from McTune and her roommate Heather Delander’s rented townhome, leaving behind water damage and destruction and rendering the house unlivable.

Both McTune and Delander were unaware of the possibility of flooding when they moved into the Chandalar Court townhouse two years ago.

“No one said anything about flooding,” McTune said. “I didn’t even know we were in a flood zone.”

“[The flooding] was unexpected,” Jenkins said. “From the time we’ve been managing, we’ve never seen this.”

Like so many others impacted by the April 7 flooding, McTune and Delander were not covered by flood insurance, and thus will not be able to receive compensation for what McTune estimates to be thousands of dollars of lost property.

Since April 7, McTune and Delander have been living with friends and returning to their damaged home to feed their cats. They have also been waiting for their remaining property to dry and looking for alternative housing before their April 18 move out date.

Although dealing with the aftermath of the flooding has been very difficult for McTune and Delander, perhaps the most difficult thing to deal with is what they have lost.

“It’s heartbreaking,” Delander said. “Those are things we can’t replace.”