CHHS Theatre has fun with ‘Guys and Dolls’ 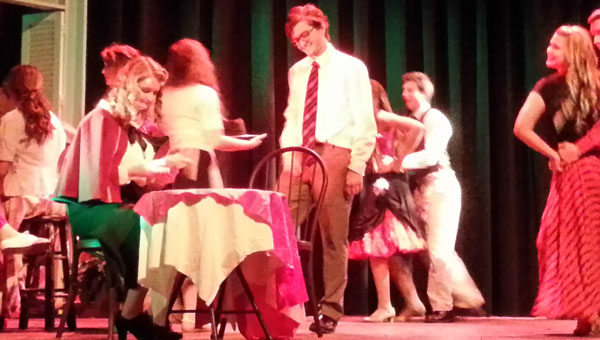 Tate Pollock, center, said “I have to thank vocal teacher Kay Dick who helped me get through singing in front of people for the first time.” (Contributed)

“Everyone who saw the play has had nice things to say,” said Coach Wayne Trucks, principal of Chelsea High School. “The kids did a great job. They were supportive with everything, things you just don’t learn in principal school.”

Trucks was speaking of CHHS theater department’s production of Guys and Dolls and his roll of mobster, Big Jule.

“Francie (Gardner) did a great job preparing the kids. In theater, you have a wide variety of talents to pull together, leads, ensemble, tech, etc.,” Trucks said. “She finds a way for all of them to be successful.”

“We didn’t think it was going to be good after struggling in dress rehearsal,” said Tate Pollock, CHHS senior, who played gambler Sky Masterson. “We just decided to go all-out in the performances. Everyone has been telling me we did great, ‘This was the best play in a long time.’”

“I really got into the character. I was like being all suave,” Pollack said. “Back stage I was dipping girls and stuff, trying to be the lady killer. I had a lot of fun.”

“I knew immediately I wanted the part of Adelaide, she was the fun character,” said Taylor Hyde, also a senior. I got the Broadway album and memorized all the songs before try-outs. I just knew I could get the part if I worked hard enough. Vivian Blaine played her as the perfect ditsy blond in the movie. I have dark hair, but I am blond on the inside and a little ditsy.”

“Adelaide is so contradictory. She wants a life as housewife and the white picket fence, but she works as a burlesque dancer,” Hyde said. “She was a lot of fun to play.”

“My ‘techies’ are the ones responsible for all that goes on behind the scenes: Lights, sound, scenery, etc.,” said stage manager and senior, Jalene Clymore. “They really had my back and did a great job.”

“We have a lot of seniors in theater this year,” said director Francie Gardner. “They had a lot of fun with all of the attention. I wish we could fit them all in the article. They are all so talented and I am going to miss them next year.”

By TONY NIVENS / Community Columnist “Coach Evers…Coach Evers, There is a man in the locker room with a gun!... read more