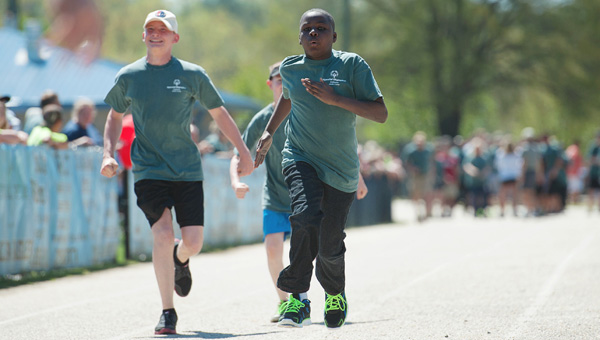 I think the Special Olympics are my favorite event I’ve ever covered, and that’s not to slight anything else I’ve been to. It’s more or less because these athletes are competing unbridled. (Contributed/Troya Yoder)

We live in a competitive world.

Each day is measured in wins and losses. We are so focused on achieving great things and working hard to be able to achieve those great things, we sometimes lose focus on having fun along the way.

I realized that I was as guilty as anyone of this when I went to cover the Special Olympics track and field day in Calera April 10. And I am so thankful the talented athletes there took time to show me what I was doing wrong.

For these athletes, just the opportunity to feel the warmth of the sun on their faces on a gorgeous spring day and run as fast as they can to the finish line means the world to them. There are no frowns when they finish second. No angry words when things don’t go their way. Just the ability to compete is enough.

I wish I could handle things that way.

One athlete there told me just having people he didn’t know cheer him on as he raced around the track was his favorite part.

If only we all could stop to listen to those cheering us on, pulling for us to succeed and wishing us well instead of having tunnel vision on the next great goal we have.

I think this is my favorite event I’ve ever covered, and that’s not to slight anything else I’ve been to. It’s more or less because these athletes are competing unbridled.

The trophy isn’t the ultimate goal here. The chance to compete for the trophy is.

These wonderful young men and women pick up on the finer details. The wind in their faces, hearing their individual names being called from the stands as they zoom past, giving everything they have for as long as they can because it’s a chance to be completely free.

We could all learn from them. I get stressed and mad when a car going five miles an hour slower than I think it should holds me back from going where I want to. Here, these athletes have a world of adversity, and never a cross word.

It’s not the end, it’s the journey they say.

These guys get it. I wish everyone could.