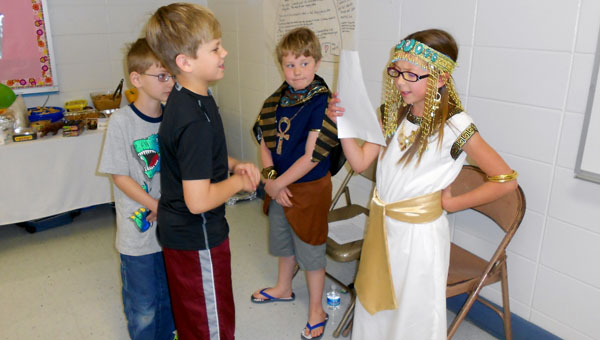 HELENA—On April 11, Laura Sokol’s second grade class brought a world tour to Helena Elementary School with the presentation of their “Cinderella Around the World” project. Students dressed up in traditional costume and prepared dishes from various culture around the world, some as close as the Appalachian Mountains and some as far as the Spice Islands.

Throughout the school year, Sokol’s students are introduced to a “culture of the month.” They read books, learn facts and discover each culture’s unique version of the Cinderella story.

“It’s an in depth study of the culture,” Sokol said. “Through fiction and non-fiction they learn about every day life.”

To conclude the cultural study, each of Sokol’s students chose a culture to research in depth. They are paired through their choice of culture as a Cinderella and her prince.

“The girls pick through the literature and the Cinderella story, and boys choose their culture based on research,” Sokol said.

For a month, the second graders research the traditional dress and food of their chosen culture and prepare an informational presentation.

April 11 was a culmination of their hard work. Parents and fellow Helena Elementary students were taken on a tour of the world as they stopped in front of each pair. The girls presented on their culture’s unique Cinderella story and boys presented an overview of their culture’s history and daily life.

“They were so excited,” Sokol said of her second grade class. “They really loved it.”