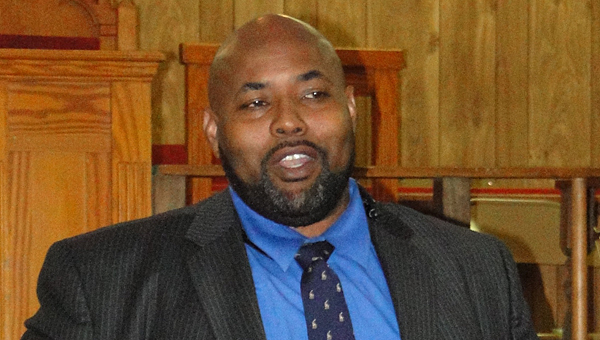 NAACP Shelby County branch President Kenneth Dukes thanks his supporters for entrusting him to lead the group in its purpose to create a voice for people who don’t know how to speak for themselves and protect their rights. (Contributed)

By MOLLIE BROWN / Special to the Reporter

The NAACP Shelby County branch, formed in February 2014, hosted the Alabama NAACP State Chapter quarterly meeting prior to electing officers on April 12 at the Shelby Spring District Building in Calera. Approximately 70 youth and adult Alabama NAACP members were in attendance.

State Chapter President Simelton called the meeting to order and asked for reports and old business before addressing the new business of voter education training. In reviewing the Alabama NAACP education/voter empowerment handout, Simelton discussed voting rights and protections in the aftermath of the Supreme Court’s decision in Shelby County v. Holder. He stressed the importance of moving every individual from an unregistered voter to an active participant of the voting process.

“NAACP is nonpartisan,” Simelton said. “We want to hold political forums and invite all election candidates to workshops, seminars or town hall meetings to educate the community. When we educate people about issues, they are more likely to get out and vote.”

The key goals of voter education are: 1) Educate people about the issues. 2) Distribute educational material. 3) Conduct voter registration drives. 4) Inform people of their right to vote. 5) Target African Americans, Latinos and other people of color, low income, women, immigrants and other underrepresented or disadvantaged groups. 6) Provide rides to the polls for individuals. 7) Set registration goals.

The goals are met through door-to-door and phone canvassing, emails and social events. Members will participate in Get out the Vote (GTOV) by offering rides to the polls, poll watching, monitoring activity at the polls, announcements in church bulletins and hosting rallies prior to elections.

President Dukes emphasized the importance of helping Democrat voters understand that though Shelby County is predominately Republican, it’s important to cast a vote.

“They’re asking if we need to vote if no democrat is running and we (NAACP) need to help them understand that if no Democrats are running, you still need to vote in the Republican primary,” Dukes said. “It sends a message you count in determining the outcome of those elections, therefore Republican candidates come and discuss things with you.”