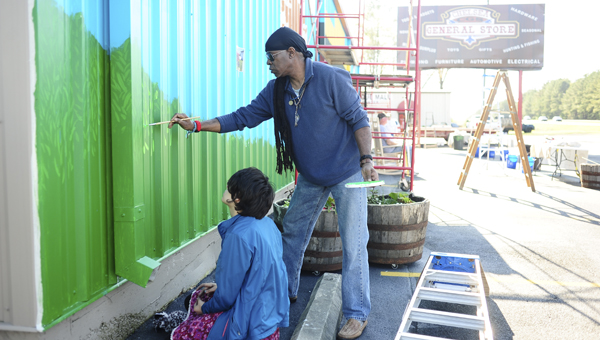 CHELSEA  — In recent weeks, students from Chelsea High School, Oak Mountain High School and the University of Montevallo have spent afternoons and weekends painting a mural on the exterior of Chelsea General Store.

Owners Dale and Mary Neuendorf have partnered with Birmingham artist John Solomon Sandridge to offer a series of student workshops about mural painting. Sandridge, a Birmingham native, is also an author and founder of The Number 2 Pencil Foundation, a nonprofit that teaches young people how to “save their own future” via imagination.

The students are painting a scene depicting an old country general store. The mural is inspired by an image already hung and framed inside the Chelsea General Store, and features four men relaxing on the store’s front porch. An old-fashioned Coca-Cola freezer sits nearby.

Sandridge said the students’ response to the workshops is exciting. While some students have gravitated toward portrait painting, others are more interested in scenic painting. The varied interests make for a perfect blend of creativity and talent.

“The project is really inspiring, and that’s my wish as an artist,” Sandridge said. “We’re promoting that theme of the past, the good ol’ days.”

Sandridge added: “Art is a tool that young people can use to develop their imagination, to change their life situation and to change the world for the better. I always tell the kids that your imagination will take you anywhere you want to go.”

The students began working on the mural earlier this month and are expected to complete it this week, Sandridge said.

“We’re real pleased to have him doing this teaching project,” Neuendorf said of Sandridge. “We’re all going to celebrate when it’s done.”