Rising above the flood waters 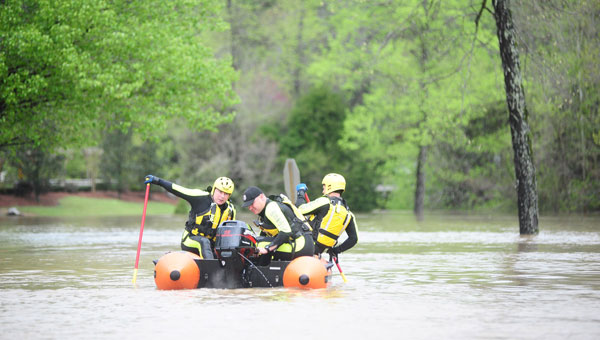 Communities came together on April 7 to help those affected by the widespread flooding throughout much of the county. (Reporter Photo/Jon Goering)

Coming from up north, I’ve experienced my share of bad weather, but nothing quite compares to the flooding I saw in Pelham on April 7.

Driving to work, I thought it was just another rainy day, but when I arrived at Chandalar Drive in Pelham to report on the flooding, I was shocked.

What had been a regular residential community hours before was now under five feet of water. I watched as Pelham police and firemen in boats and Humvees rescued residents from their flooded homes.

While the extreme weather was striking, what stood out to me more was the community response, both during and after the flood. Police and firemen arrived at the crack of dawn to help residents from their submerged homes, others, such as the Pelham Parks and Recreation Department, put down what they were doing to assist in rescue efforts and people opened their homes to those displaced by the rising waters. Every person I talked to in the days following the flood had a story about someone’s efforts to help those around them.

Because of the hard work of many people, communities have been able to carry on while the flood- water recedes. For example, although Helena’s park was damaged, Helena Councilwoman Cris Nelson said the Buck Creek Festival will still happen as usual, largely because of the dedication of the Streets and Sanitation Department.

Although it was difficult to see the flooding and the damage, witnessing the community pull together and rise above it has a special experience.

Molly Davidson is a staff writer for the Shelby County Reporter. She can be reached at 669-3131 ext. 24 or by email at Molly.Davidson@shelbycountyreporter.com.