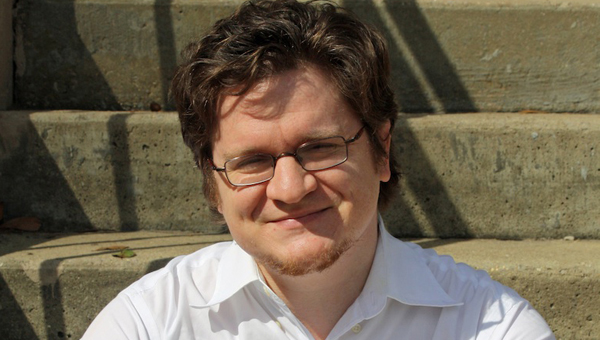 “It was a lot of fun, stress, and definitely madness,” Kent said about the three-week-long tournament that he competed in on top of his normal job as a software engineer and his daily exercise of writing and illustrating for his sons.

The international March Madness Poetry competition sponsored by Think, Kid, Think! pits writers, called “authletes,” against each other in head-to-head competition in a NCAA bracket-style tournament. Each authlete is assigned a word, ranging from “whatever” to “kerfuffle,” and must complete a poem using that word in 36 hours.

“It’s very challenging when you consider that your target readership is between seven and 15 years old,” Kent said, noting that his most challenging word was “ampersand.”

In order to win and advance to the next round, an authlete had to receive the popular vote in two of three categories, the public vote, the competitor vote and the classroom vote.

Kent said he encouraged his supporters to “please always vote for your favorite, not just for me.” Even so, he won most of his rounds taking the majority vote in all three categories and received praise from many fellow poets for his work.

“This is one I wish I’d o’written myself,” award-winning author Allan Wolf said of Kent’s final round, and competition winning, poem using the word “ampersand.”

“That was one of the best poems I’ve written and some of the highest praise I could have received,” Kent said. “It was very humbling.”

So what is next for Helena’s champion poet?

Kent said he is finishing illustrations for a collection of children’s poems he is working to publish, and he is also scheduled to do several classroom visits at local schools.

On top of that, he is still doing what he loves, writing daily poems with accompanying illustrations for his sons every day.

FROM STAFF REPORTS MONTEVALLO–The University of Montevallo has announced that the speaker for spring commencement ceremonies May 3 will be... read more