Vincent students get taste of the business world 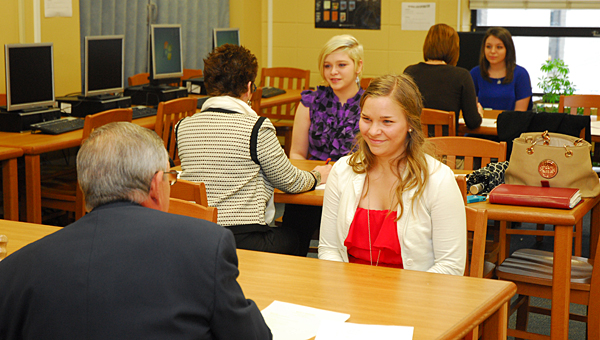 Sophomores and seniors at Vincent Middle High School exuded confidence, professionalism and a bit of nervousness on April 18 as they got a taste of one of the most nerve-wracking situations in the business world.

Throughout the morning, groups of students took turns participating in mock job interviews with local business professionals, school leaders and elected officials in the school’s library.

The interviewers, who came from companies such as Cadence Bank, First United Security Bank, the Shelby County School System and Shelby County Newspapers, Inc., sought to replicate an authentic job interview while providing the students pointers for the future.

“We just want them to experience sitting down across the table from someone they don’t know and think on their feet in a situation where a job is on the line,” said VMHS Principal Joel Dixon, noting the mock interviews were part of the Shelby County School System’s My Future program.

During the interviews, students shared future career plans ranging from helping animals as a veterinarian to arguing cases in a courthouse as a trial lawyer. The students also credited involvement in extracurricular activities such as the school’s football team and afterschool jobs in developing their career teamwork skills.

Dixon said sophomores usually have more jitters during the mock interviews than their senior counterparts.

“We noticed last year that the sophomores were so much more nervous than the seniors, because thinking about a career is still a few years away for them,” Dixon said. “For the seniors, that time is now.”

McAllister said he sought to ease the students’ apprehension and used the event as a teachable moment for the kids.

“When I could tell they were nervous, I would tell them to relax. All we are doing today is practicing,” McAllister said. “It’s just an opportunity to practice answering questions they may have answer again in the future.”

By CASSANDRA MICKENS/Associate Editor HOOVER —The Hoover Board of Education April 17 unanimously voted to charge students a fee to... read more