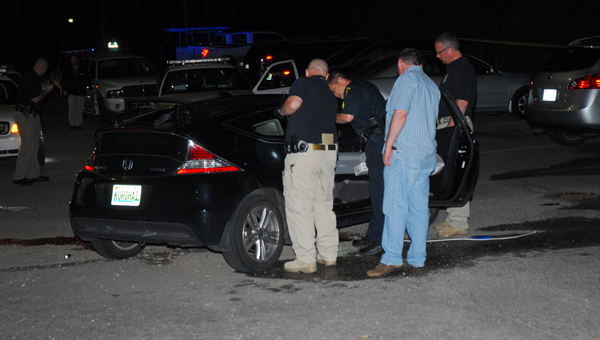 HELENA – A 25-year-old man was transported by ambulance to the hospital with non life-threatening injuries after he was involved in a shooting in the parking lot of Helena’s Papa Saia’s restaurant at about 8:30 p.m. on April 19.

Helena Police Department Sgt. Chris Rollan said Helena and Pelham police officers responded to the scene after receiving reports of a man brandishing a handgun in the restaurant’s parking lot. Rollan said the man was involved in a possible domestic dispute leading to the incident at Papa Saia’s.

“Officers arrived on the scene and gave him verbal orders to drop the weapon,” Rollan said as officers worked to recover evidence from the scene at about 10:45 p.m. “There were patrons within 100 feet of the man. Officers tried to talk him down for about five minutes, but he continued to brandish the fully loaded weapon.

“There was an exchange of gunfire, and the subject was struck once,” Rollan added, noting the suspect’s name has not yet been released. 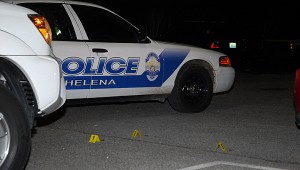 Rollan said the man sustained a single gunshot wound in the incident, and was transported by ambulance to a local hospital for treatment. No other injuries were reported, and as of April 19, Rollan said he was unable to identify who shot the suspect.

The shooting happened near the man’s black Honda CR-Z vehicle, which was still parked diagonally in one of the parking lot’s travel lanes at about 10:45 p.m. The vehicle was on the opposite side of the parking lot from the entrance to Papa Saia’s.

“Nobody in the establishment was in danger,” Rollan said. “The restaurant had nothing to do with this.”

Rollan said Pelham officers responded to the scene to help Helena officers after hearing reports of the incident on their police radios. Because the incident involved multiple law enforcement agencies, the investigation was handed over to the Alabama Bureau of Investigation.

At about 10:45 p.m., ABI agents were still marking shell casings and collecting evidence from the suspect’s vehicle.