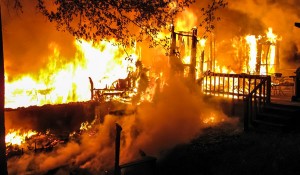 The First Battalion of Shelby County responded to a blaze on April 20 (contributed).

MONTEVALLO—At approximately 2 a.m. on Easter morning, the First Battalion of Shelby County responded to a structure fire in Montevallo.

The two story single-family dwelling was engulfed in flames when the firefighters arrived on the scene. The blaze was quickly brought under control, but the home was a “total loss,” according to Brierfield Fire and Rescue Chief Spruce McRee.

“No occupants were at home,” McRee said, and also confirmed no firefighters were injured.

The cause of the fire is unknown at this time.