“Miracles for Breakfast” show is April 27 at SCAC

Danny Brooks is a living miracle. A prolific singer/songwriter and author whose musical genres spread from gospel, blues, country to R&B, Brooks will perform his unique Texassippi Soul Man show on Sunday, April 27, 2014, at the Shelby County Arts Council performance venue at 3 p.m. Doors will open at 2 p.m. with 2BLU opening at 2:30 p.m. Ticket are $15 and can be purchased in advance at Shelbycountyartscouncil.com. 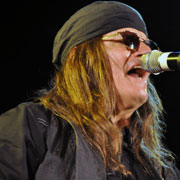 Brooks has loved music all his life. He was influenced by DJ’s as Howling Jack Wolf Man and artists as Taj Mahal and Allman Brothers. His mom bought him his first instrument when he was in the third grade: A $9 ukulele.

That Christmas he received a six-string guitar, and the rest is history. Brooks has released nine albums in his 30-year career. He has also written his autobiography, “Miracles for Breakfast, How Faith Helped Me Kick My Addictions.”

Brooks’ life story is one of despair, hope and redemption. During his years of “rebellion,” Brooks spent time in prison, became a drug addict and an alcoholic. In 1987, he turned his life over to Christ and became a “Soul Man.” His life is proof that there is no hole too deep that God cannot pull you out. Today he sings as well as ministers to prisons and halfway houses to bring hope to the hopeless. His life is living proof of what he speaks.

“I have learned that no matter what you do, there is nothing that God cannot do to get you back on track,” said Brooks in a phone interview from Canada where he had been ministering to prison inmates. “I look for God in everything. I do not take miracles for granted. The word in II Corinthians 2:14 says we are to defuse the fragrance of the knowledge of God in every place. There are Christians artists. I am an artist who happens to be a Christian. I try to shed light wherever I am, sometimes subtly through the lyrics of my songs. I hope that you can hear my songs and come away with a nugget that stays with you.”

Weight Watchers at Work starts May 7

Columbiana’s Weight Watchers at Work program will begin on May 7. (Contributed) By PHOEBE DONALD ROBINSON / Community Columnist The... read more