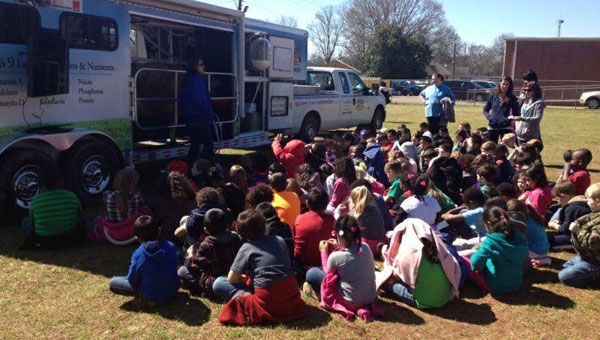 On March 14, MES students were escorted to the MHS football practice field where the event was held. They started their day off making symbolic bracelets with national blue and corn gold colored beads after learning that these were the FFA’s national colors. Next, they entered the big show tent and watched an entertaining and sometimes laughable performance put on by FFA members to guide them through the history of agriculture and how it has changed over the years.

The students then moved on to Michaela Sanders and the mobile dairy classroom, the goal of which is to educate children on the dairy industry. MES students saw a live cow at this portion of the day’s events. Ms. Sanders demonstrated how to milk a cow and explained how the milk process winds up in your refrigerator. The kids got to learn about agriculture in an “outside classroom format” in a way that they may never experience elsewhere.

The MES students also got to walk through the farm day petting zoo, featuring animals brought in by the high school’s FFA members. The kids saw chickens, cows, a horse, rabbits, quail and ducks among other animals.

“It was great to see our high school students branch out of their comfort zone and share their passion for agriculture with the younger children. Most rewarding was seeing the kids leave with smiles on their faces, and knowing that we had an impact on their day, and their knowledge of agriculture. We always want them to remember the blue jacket, and the smiling and dedicated member that comes with it,” said chapter President Meredith Goggins.

On March 15, Farm Day was opened up as a free community activity. People of the community were welcomed in by FFA members as they experienced an antique truck and tractor parade, a field of vendors, live entertainment by the Montevallo FFA String Band among others, a silent auction, a petting zoo, an archery exhibit, a kid’s area and concessions.

FFA officers rode through the town on the first trailer, followed by a flashback of trucks and tractors. The parade entertained the small town by bringing it back to its roots.

After the officers returned to Farm Day, they rejoined with fellow FFA members and opened up the event. The show tent was separated into a silent auction, where community members could bid on items donated by businesses in the community and a stage for entertainment. All proceeds from the silent auction went to the FFA Alumni for scholarships for FFA senior members.

The petting zoo was a big hit on Saturday as well, as FFA members continually showcased their animals, so adults and children alike could enjoy the occasion.

Junior FFA Historian Lena Buttgereit said of the event, “Farm Day on Saturday was a fun experience. It was a great opportunity to get involved with the community. Seeing little kids faces light up when interacting with the animals had to be my favorite part.”

At the archery exhibit, MHS FFA archery team members helped kids who had permission from their parents shoot bows. For some of the kids it was their first time ever holding a bow.

At the kid’s area, there was a moon bounce, a gift shop and kids’ games including a cake walk, an egg toss and corn hole games. “It was great to see the kids having a blast and enjoying themselves around agriculture,” said sophomore FFA member Madison Cristwell.

At concessions, FFA members served the community delicious barbecue that Tracey Lawley prepared with the help of his son, sophomore FFA member C.D. Lawley. Community members had a great time fellowshipping with one another, learning about agriculture and supporting the blue jacket and FFA.