Make a difference in a child’s life 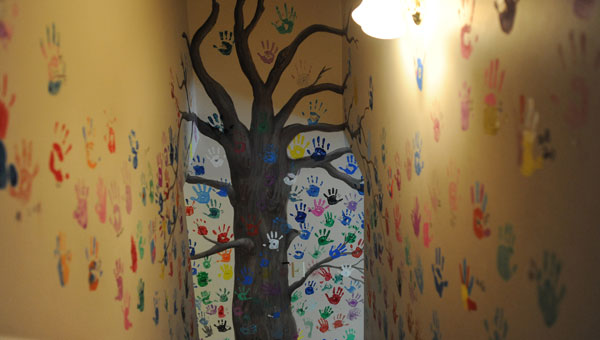 Child abuse victims and sometimes their family members leave a handprint on a mural of a tree downstairs when they complete their time at Owens House – a sign to future visitors that others have walked in their shoes. (contributed)

I think of Shelby County as a safe place, an obvious choice when deciding where you want to buy a home or start a family.

After all, the county is relatively affluent with high medium household incomes. It was named the healthiest in the state for several consecutive years. Shelby County is home to several fantastic school systems and top-notch law enforcement agencies. Its municipalities are regularly ranked among the best places to raise children in national magazines and surveys.

After three years here, I sometimes forget that abuse and suffering happen here too, even though I hear about it every day in the newsroom. Luckily, Shelby County is home to many wonderful organizations that work with abuse victims. For the last two years, I have been a small part of one of those organizations as a board member of Owens House, Shelby County’s Child Advocacy Center.

April is Child Abuse Awareness Month. Both physical and sexual child abuse happens here in Shelby County. It happens to boys and girls, in single-parent and nuclear families, in rich homes and poor homes, to white, black and Hispanic children.

Owens House, which celebrated its 20th anniversary last year, has many goals, but its two main functions are to coordinate investigations into alleged abuse and educate the public about child abuse. The non-profit agency coordinates the investigation, prosecution and treatment of child abuse while offering therapy to both the victims and their families.

through its child sexual abuse prevention programs in local schools.

I hope you will take the time to learn about the signs of child abuse and consider supporting Owens House, either through a donation or participating in one of its upcoming fundraisers.

The Blue Ribbon Motorcycle Ride will be May 17 at the Harley-Davidson Dealership in Pelham and the Superheroes 5k and Fun will be June 21 at Veterans Park in Hoover. For more information, visit Owenshousecac.org.

Katie McDowell is the General Manager of the Shelby County Reporter. She can be reached at 669-3131 ext. 19 or by email at katie.mcdowell@shelbycountyreporter.com.