Vincent baseball advances to second round of playoffs 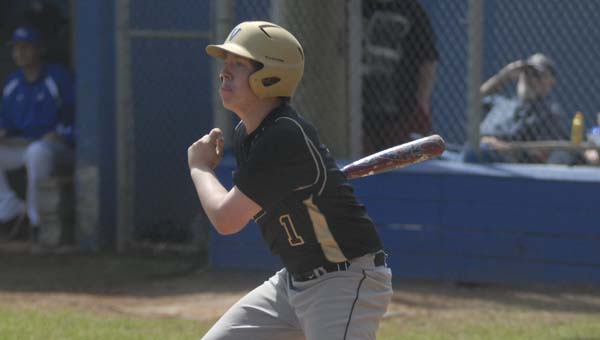 Matthew Swift scored on a passed ball to give the Vincent Yellow Jackets a win over Horseshoe Bend in the first round of the AHSAA Class 2A playoffs. (Reporter Photo/Drew Granthum)

VINCENT—“Two wins, two games and onto round two” was the theme for Vincent baseball on April 21, as the Yellow Jackets punched their ticket to the second round of the AHSAA Class 2A playoffs with a sweep of Horseshoe Bend.

The Jackets won two nail-biters, each by a score of 6-4.

In the opener, Vincent looked to have the upper hand early, going up 2-0 when Kristopher Phillips scored on an error and Cornell Bonner scored on a Ryan Childers groundout in the bottom of the first.

Horseshoe Bend answered with three runs in the top of second to capture a 3-2 lead. Vincent responded with a run in the bottom of the fourth as Michael Gilham crossed the plate on a Sam Lynn double to tie the game. Vincent added two more in the bottom of the fifth as Phillips scored on a Daniel Hawkins single and Hawkins came around to score on a Hayden Laddie single to right field to put Vincent up 5-2.

The Generals closed the gap to one in the top of the sixth, but a throwing error in the bottom of the inning allowed Vincent’s Matthew Swift to score, pushing the lead to 6-4.

It was all Vincent needed as the Yellow Jackets took the win. Phillips led the way offensively, going 2-for-4 with two runs scored. On the mound, Zach Baucom went 5.1 innings while giving up four earned runs off seven hits, with a walk and three strikeouts.

In the nightcap, it took a last-inning rally, but Vincent was able to complete the sweep with a 6-4 win.

After falling down 1-0, the Jackets tied the game in the top of the second (home/away designation was reversed in game two per playoff rules) when Childers and Arshon Willis each scored on bases loaded walks to go up 2-1.

Horseshoe Bend tied the game in the third, but Vincent regained control in the top of the fourth when a Kade Carroll double brought in Swift. The Generals tied the game again in the bottom of the seventh, sending the contest to extra innings.

In the top of the ninth, Swift tripled to right, and scored a batter later on a passed ball. Bonner (running for Lynn) scored on a Carroll double, and Carroll came home on a Baucom single to make it 6-3 in favor of the Jackets.

While Horseshoe Bend added a run in the bottom of the innings, Vincent was able to hang on for a 6-4 win.

Vincent now moves on to face Randolph County on April 25 in round two.