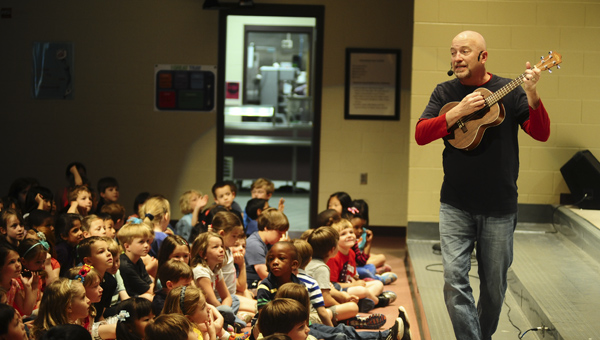 HOOVER — Greystone Elementary School kindergarten through third graders spent the morning of April 24 rockin’ out to the sounds of singer-songwriter Roger Day as part of the school’s seventh annual Young Authors Week.

“We teach the kids that there are different types of writers,” Richey said, adding that students spent the week writing fiction and nonfiction works, poetry and song lyrics.

“We want the kids to know that writing doesn’t have to be boring; writing can be fun,” Richey said.

Earlier in the week, students had the opportunity to meet children’s authors Sarah Weeks, Laura Golden and Jesse Crawford, illustrator Henry Cole and singer-songwriter Day, who performed a mini concert for students in the cafeteria April 24.

Richey said the guest writers shared valuable lessons with the students, encouraging them to be persistent in their writing and to draw from their surroundings for ideas. And, perhaps the most important lesson of all — Never give up.

“When an editor or a teacher returns your work with corrections, you don’t give up,” Richey said. “You keep trying.”

Day, of Nashville, a two-time Parent’s Choice Gold Award Winner, is among the nation’s top touring family artists. At GES, Day sang a medley of his songs, including the audience favorite “Roly Poly.” Day also met with students in small groups to teach them how to write a song.

“The kids just love him,” Richey said of Day.

Following his performance, the students thanked Day by serenading him with a surprise medley of “Birthday” by The Beatles and “Happy Birthday” by Stevie Wonder in celebration of Day’s birthday.

“That is the best birthday I’ve ever had,” Day said afterwards. “Thank you so much!”