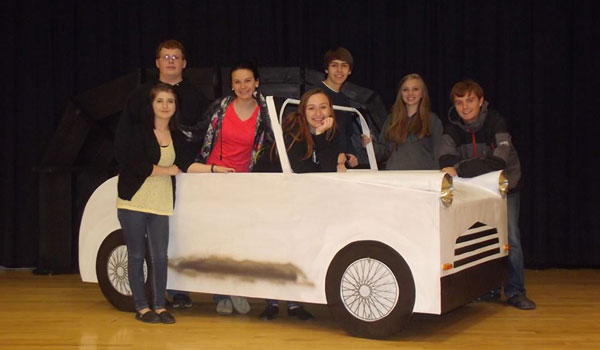 VINCENT—Kids at Vincent Middle High School came out in droves for the first play production in over a decade, theater teacher Allison Davison said.

This is only the third play the school has produced in 17 years, so the department had to start from scratch, buying everything from the license and copyright of the play, Grease, to the scripts and music.

“We’ve put on a lot of fundraisers,” Davison laughed, and said the school also used money donated by White Rock Quarry to get the project started.

Vincent Middle High Principal Joel Dixon first decided to bring theater back to the school to encourage participation for kids who were not necessarily interested in other groups.

“While schools are absolutely all about academics, they’re also about other things. It should be a place where kids feel like they can belong,” Dixon said. “There is a number of kids where that (theater) is their niche.”

Anjalea Skinner, who plays the female lead Sandy, had never been in a play before she tried out for Grease.

“I’ve enjoyed everything (about the play), and I’ve met a lot of new people,” Skinner said. “I will definitely do other plays.”

Davis Whitfield, who plays bad boy greaser Danny, said the cast and crew have become very close throughout practices, and he will “without a doubt” participate in other productions.

“This has become my second family. It’s pretty deep stuff,” he said.

The students will perform on Friday, May 2 at 6:30 p.m. and Sunday, May 4 at 2 p.m. in the auditorium of Vincent Middle High School. Concessions will be sold, and tickets are on sale in advance as well as at the door. Tickets are $5 for students, and $7.00 for adults. For more information, contact Allison Davison at ADavison@shelbyed.k12.al.us.