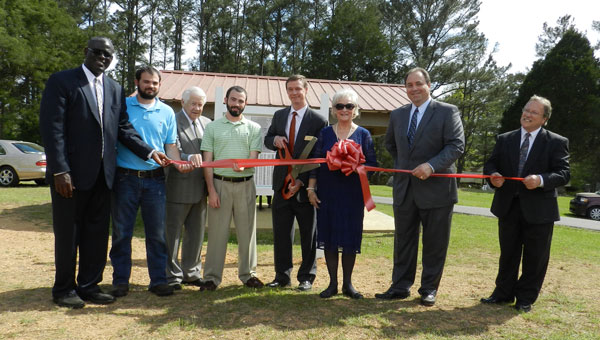 The Columbiana City Cemetery has been recently restored, renovated and mapped with all graves cleaned and identified, the culmination of many years of work to preserve the history and final resting place of many Shelby County’s citizens.

Thomas Sterrett, infant son of A.A. and E.M. Sterrett who lived for one day, is one of the earliest graves dated August 1836. The earliest birth date noted is Jesse Harris, born on May 31, 1770, and died October 7, 1861. The Nelson family has the most family graves at 30.

“The Shelby County Historical Society was the first county in Alabama to complete a cemetery survey book,” said Bobby Joe Seales. “The two-volume book was competed in 1978 under the leadership of the late John and Kate Reese of Chelsea. We have the original books on file at the Shelby County Museum and Archives. The Columbiana Cemetery, as it was known then, was surveyed and copied by Mrs. Karl Harrison, Miss Ann Ingram, Mrs. Oakley Vincent, Mr. Herrie Vincent, Mrs. Harold Horton and Mrs. Herman Strong.”

The project regained interest in the early 2000s when Scoutmaster Dr. Stancil Handley, now mayor of Columbiana, and Scoutmaster Sid Wheeler took Troop 560 on a campout behind the cemetery. Robert and Andrew Justice, sons of Beverly and Bill Justice, were on that life-changing campout.

Both boys choose the cemetery as their Eagle Projects. Robert mapped the graves in 2005 assisted by Wheeler, who is a surveyor. Three copies were made for the city, historical society and display. In 2006, Andrew continued the project and built a pavilion under which the maps were displayed on tables protected with Plexiglas with materials donated by Brown Lumber. Unfortunately, the tables were vandalized within a week and the maps destroyed.

In 2011, the Church of Jesus Christ of Latter-day Saints took up the mantle to restore the cemetery and make a new display map marking the graves using an alpha grid system, completed on April 13, 2014.

The cemetery, pavilion and map is located Highway 47 outside of Columbiana. Complete list of names is located in the Shelby County Historical Society website.

“Miracles for Breakfast” show is April 27 at SCAC