ISS alum named one of TIME’s 100 Most Influential People 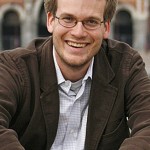 Green, an Indianapolis native who wrote the young-adult bestseller “The Fault in Our Stars,” is listed among other artists and entertainers like late night talk show host Seth Myers, “12 Years a Slave” director Steve McQueen and actor Matthew McConaughey. Green also manages a YouTube channel, vlogbrothers, and organizes an annual conference for video bloggers, VidCon.

Actress Shailene Woodley, who stars in the film adaptation of “The Fault in Our Stars” out June 6, wrote that Green is “more than just an author, an artist and an innovator.”

“I would go so far as to call him a prophet. No, not a prophet in a biblical sense. Don’t freak out. More a prophet in a universal, all-things-connected sort of context. Some say that through his books, John gives a voice to teenagers. I humbly disagree. I think John hears the voices of teenagers. He acknowledges the intelligence and vulnerability that stem from those beautiful years when we are, for the first time, discovering the world and ourselves outside of our familial stories,” Woodley wrote.