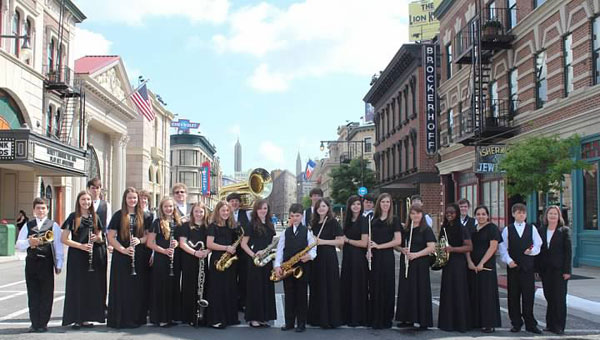 They were in Class A division of Concert Bands, which is the smallest division in the category: School enrollment ninth-12th grades of 600 students or fewer. Kingwood’s enrollment for sixth-12th grades is 200. The public and private school bands that participate in Festival Disney are from all across the nation.

For seven of our students, it was the first time to perform at Festival Disney. Excitement was high! The band members were focused and had an outstanding performance.

“The Awards Ceremony at the Lights, Motors, Action Theater at Disney’s Hollywood Studios was electric. When Class A Band’s ratings were announced, Kingwood Concert Band received Superior! Our band and parents were on their feet with joy. Then when Kingwood Concert Band was announced as Best in Class for Class A schools, we were ecstatic! God’s blessings have overtaken us” said Band Director Tyra Cutcher.

Kingwood’s band consists of 23 members, sixth-12th grades, who performed at Festival Disney. The band director has been told in the past by college band professors, that it is very difficult and next to impossible for small bands to receive a superior rating because every student is heard and they would all have to play their best to “make it.”

“Well, it is not impossible with excellent students and God’s blessings,” said Cutcher.

The 10th Annual Festival Disney Superior trophy and the “Mickey Best in Class” trophy is a reminder to the students of what they can do.

KCS Concert Band performed before and during the Elementary Musical on Kingwood’s Fine Arts Night at Kingwood Church on Thursday, April 24th. The concert was open to the public.

Woods is TIS Support Person of the Year

By SANDRA THAMES / Community Columnist “I am married to Barry Woods and have lived in the Shelby County area... read more