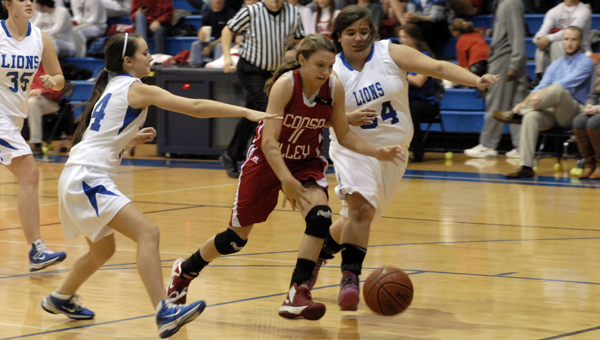 Coosa Valley’s Danielle Richardson, seen here in a file photo from 2013, uses plays in honor of her late father (who was also her AAU coach) who passed away during the 2013-2014 season. (Reporter Photo/Mickel Ponthieux)

There are few things as captivating as the love between an athlete and the sport they play. Athletes pay attention to detail making sure their game is ready for any trials and moments when it will be tested most.

For Coosa Valley Academy’s Danielle Richardson, her love of basketball and her love for her father go hand in hand. Richardson, a junior at CVA, has been playing basketball since she was seven years old.

It was love at first shot, she said.

“I went to the Chelsea rec league,” she said. “I fell in love. I’ve played AAU (American Athletic Union) since sixth grade. I’ve been playing my whole life.”

She also had a very close relationship with her AAU coach, who just happened to be her father, Todd. From the start of her career until the time she took the floor for varsity competition, Todd made sure he taught his daughter everything he could about the game.

“My dad was the best coach I had, because he was my dad,” Richardson said. “He knew what I was doing wrong. I could hear his voice in the crowd.”

“They were inseparable,” he said.

Sadly, tragedy separated them. In November 2013, after Coosa Valley’s second basketball game, Todd passed away from a heart attack.

With one of the most important influences in her life gone in the blink of an eye, Richardson turned another love to help ease the pain.

Rutledge said he was amazed at how Richardson handled herself through a tough time.

“It was truly amazing,” he said. “The next week, she was on the court playing for him. It’s like she’s much older than (her age).”

Playing in memory of her father, Richardson helped lead the Rebels to the AISA state semifinals. Although the squad came up short of reaching the finals, Rutledge said the team responded to Richardson’s leadership all season long.

“She is a great leader for young girls,” he said. “She’s got the whole package. In a clutch situation, she wants the last shot. It means a lot to have someone you can depend on. She’s always positive.”
Richardson said she was looking at playing on the next level, and will continue to take the memory of her dad with her wherever she goes.

“I just try to remember the advice he gave me,” she said. “The basic stuff. Little things are big in a ball game.”

Lions sweep Patriots in second round match up

The Briarwood Christian Lions swept the Homewood Patriots, 2-0, in the second round of the AHSAA Class 5A playoffs April... read more