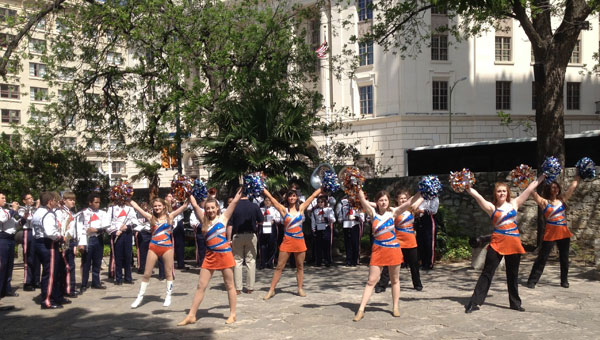 Band Director Perry Lawley believes travel is an important aspect of education and tries to expose his students to new destinations for exploration each year. Past trips the band has taken include Orlando, Washington, D.C., Chicago, New Orleans, Mobile and Gatlinburg.

“Bands have unique opportunities to perform in various capacities,” Lawley said. “I plan a trip to include a performance as well as sight-seeing. I feel an obligation to share my love of travel and help students see the world beyond Montevallo, and to show them that travel is a meaningful way to broaden their horizons.”

San Antonio is rich with cultural and historical opportunities: The Alamo and architecture of early Spanish life in the Southwest, art museums and the Opera San Antonio, the River Walk and Old West theme parks as well as Sea World and Six Flags.

“San Antonio has a distinctive mix of culture and history,” Lawley said. “The Alamo is one of the most important symbols of American bravery, and we were able to tour it as well as perform there. The River Walk area of San Antonio combines art and architecture with superb engineering to create a fun and festive atmosphere that no other city offers.”

“Our performance at the Alamo went very well,” sophomore Claire Gray said. “We had a fairly large audience, and while we were there we were able to learn so much about the history of the Alamo. Of course, we all enjoyed going to Sea World and Six Flags and riding the rides there. It was a great trip.”

Lawley intends to continue this travel tradition with band students.

“Travel broadens a student’s perspective,” Lawley said. “This trip is also a reward for a year of hard work and accomplishment. The band students at MHS are hard workers, and they deserve recognition and reward for that dedication.”

Make music a part of your life