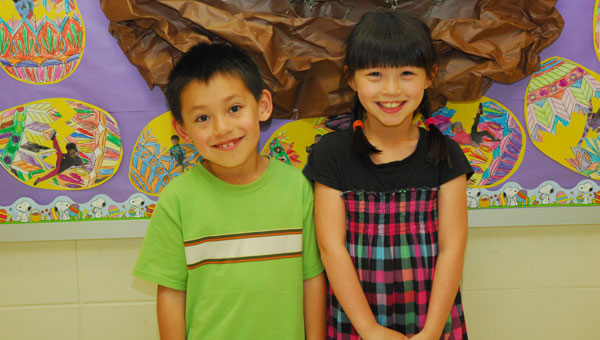 Every now and then, I run across a story that really touches my heart. I found one of those last week while talking with twins Rex and Sasha Gann.

In full disclosure, my wife is a teacher at Creek View Elementary School in Alabaster and mentioned the Gann twins a few weeks ago after hearing other teachers talking about them.

As the twins’ accomplishments grew, word began to spread throughout the school. But you would never know that after talking with the pair of first-graders.

When CVES Principal Brent Byars asked Rex to leave his classroom for a few minutes to talk with me, his face lit up as he ran out into the hallway. While I was talking with him, Rex never boasted and talked very matter-of-factly about the 1,050 books he has read since late August 2013.

It actually caused me to pause for a moment when I thought about it. In addition to going to school every weekday, Rex and Sasha have taken the time to read, on average, about four books a day every day for the past 35 weeks.

Rex and Sasha, who has read about 1,000 books so far this school year, don’t talk much about their accomplishments, their teachers told me.

Rex’s teacher, Susie Turner, said she occasionally mentions Rex’s reading total to the rest of the class, and said it has had a positive impact on all of her students.

“I’ve never had anyone read as much as him,” Turner said. “He has actually pushed the other kids to read more, even though he doesn’t talk about it.”

Sasha and Rex both denied they are competing with each other, and their teachers said they were not shooting to reach a classroom goal.

“I didn’t set a goal, because I just want them to enjoy reading,” Sasha’s teacher, Sally Perkins, told me. “She set her own goals. She just has a genuine love for reading.”

FROM STAFF REPORTS The following is a list of early dismissals and cancellations due to the potential of severe weather... read more