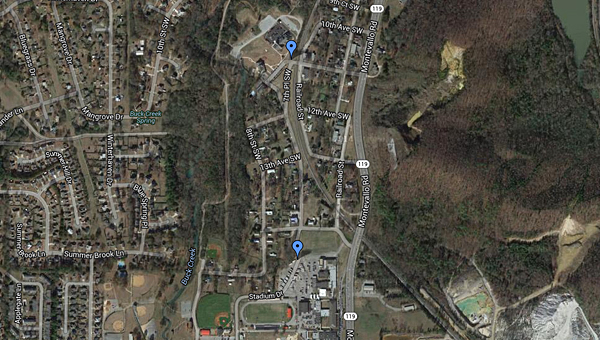 If awarded, the grant would have funded sidewalks between Alabaster City Hall and Thompson Intermediate School. (Contributed)

ALABASTER – The city of Alabaster will not apply for a federal grant to fund sidewalks between Alabaster City Hall and Thompson Intermediate School after the City Council failed to approve the grant application during a May 1 meeting.

The council was spilt by a 3-3 vote on the matter, meaning the resolution did not pass. Council members Bob Hicks, Stacy Rakestraw and Council President Scott Brakefield voted in favor of applying for the grant and Council members Sophie Martin, Rick Walters and Tommy Ryals voted against.

Councilman Russell Bedsole was absent from the meeting due to work obligations.

Had the resolution passed, it would have authorized the Goodwyn Mills and Cawood firm to submit a grant application to the Alabama Department of Transportation for a federal Transportation Alternatives Program grant.

If the grant was approved, Alabaster would have paid $100,000 to match $400,000 in federal funds to construct “sidewalk and streetscape improvements” between City Hall and TIS.

During a pre-meeting work session, some council members expressed concerns over the amount of the city’s match, and said they were concerned about the lack of a comprehensive plan for the project.

“I felt there wasn’t enough of a concrete plan for us to commit that much money. I need to see a more definite plan before I can support it,” Martin said in an interview after the meeting. “Just because we voted it down tonight doesn’t mean we can’t revisit it in the future when we get a more definite plan.”

During the pre-meeting work session, Alabaster City Manager George Henry said ALDOT will not award the Transportation Alternatives Program grants until November, and said the sidewalks would not have been constructed until spring 2015.

Rakestraw said she voted in favor of applying for the grant because it would give the city a chance to flesh out the details of the project over the next several months.