Indiana governor to give keynote at GOP dinner 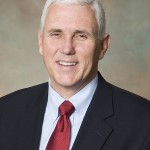 Tickets for the dinner can be purchased online at algop.org.  A reception will begin at 6 p.m., followed by the dinner at 7 p.m.

Pence was elected governor in 2012 and previously served 12 years in Congress. From 2009 to 2011, Pence served as chairman of the House Republican Conference, the third highest Republican leadership position in the House of Representatives.

“Pence has achieved the largest state tax in Indiana history while also lowering the business personal property tax and corporate income tax to strengthen the state’s competitive edge in attracting new investment and good-paying jobs for Hoosiers,” according to the governor’s website.

“Governor Pence is a rising star in the Republican Party and might very well be a Republican presidential contender in 2016. We are excited about having this distinguished Republican leader to keynote our event,” Armistead said.

Armistead said the Summer Dinner is one of the Alabama GOP’s most important events, especially since it will take place a less than three weeks after the June 3 primaries.

“It provides the opportunity for Republican leaders from across Alabama to get together and discuss the primaries, any pending runoffs and to begin planning for the 2014 General Elections concerning races that were decided on June 3,” Armistead said.