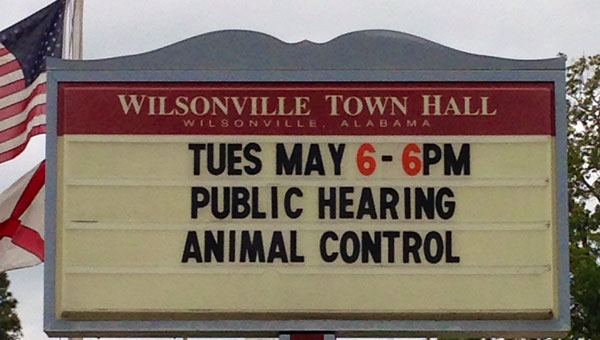 Wilsonville Town Hall held a public hearing on animal contron on May 6. (Contributed)

The Town of Wilsonville, in conjunction with the Shelby Humane Society, hosted a successful vaccine clinic on April 19 at Oak Meadow Park.

During the April 21 Town Council meeting, Mayor Lee McCarty reflected on the event.

“The Humane Society did a spectacular job. The event was well organized and Dr. Ellison was hands on, professional and did a great thing for the citizens of Wilsonville,” McCarty said.

Just days leading up to the event, Dr. Rhonda Ellison and the SHS came under fire from a local veterinarian and the Alabama State Board of Veterinary Medical Examiners for offering rabies, feline and canine vaccination packages, free microchipping and free ID tags.

The SHS decided to rescind the offer and only provide rabies vaccinations.

“I don’t know if that hurt the numbers of people with pets that attended, however Sara Shirley, director of the Humane Society, said our event was the second biggest they had ever had,” McCarty said. “The SHS has additional funds set aside for assistance with spay and neutering services. The public can contact the humane society directly.”

Several Wilsonville citizens applauded the event and the organization and gave hopeful requests for this to be a yearly event.

Mayor McCarty reported that 76 clients with 184 pets attended the event. Of the 184 pets, 26 had never been to a veterinarian or been vaccinated.

“Without a mobile clinic like this, these animals may never have been vaccinated. This is one step in the right direction,” McCarty stated.

Wilsonville is discussing a new animal control order. “The citizens of Wilsonville are encouraged to partake in the public hearing. We want to hear the concerns, the oppositions and explain the proposed order,” McCarty stated.

The Wilsonville Town Council held the public hearing on Tuesday, May 6 at 6 p.m.