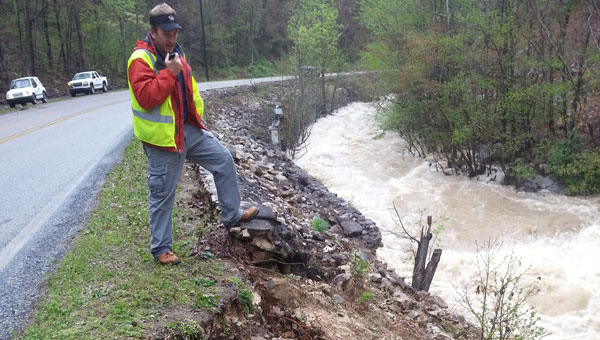 “Water is a powerful thing,” said Operations Supervisor for Shelby County Highway Department Clay Adderholt as he inspected a flood washed breach in the shoulder and rock retaining wall on old U.S. 280 in “The Narrows.”

Early on the morning of April 7, flood waters rushed through a crack in the wall and flash eroded the rocky cliff within a foot of the old road. It swept away 20 feet of the wall and road shoulder, leaving a gaping hole down to flooding Yellow Leaf Creek.

“I’m just shooting from the hip, but we should be able to repair it fine with rip rap,” said Adderholt. He explained rip rap was the large rocks you see under bridges along rivers as he rushed away to find orange barrels to mark the danger.

The Narrows have long been associated with Chelsea in the minds of thousands who traveled its tight curves to eat at Lloyd’s restaurant.

“The water had already gone down by the time I came through earlier,” said Narrows Subdivision resident Mike Franks, “but it was still over a good portion of the road. I saw the hole in the wall but I didn’t realize it was this big. It has to be 20 feet. I don’t know how they are going to fix it and make it look good.”

This infamous roadway, now Shelby County 280, has taken damage over the years, but previous floods, wrecks and even the fuel-tanker crash that left it on fire didn’t scar it this badly.

“This is dangerous, and is only going to get worse,” said Clear Chanel photographer Alan Rossnagel. “There is no denying the need to fix the wall now; every time it floods it’s going to get worse. The road will wash out and someone will die.”

Currently, the shoulder has been repaired with rip rap covered with soil. The hole in the wall remains; guarded by traffic barrels, one of which has already been flattened. Many have expressed hope that this will finally be the impetus to get the wall fixed.

“It was built by the Civilian Conservation Corps, so maybe there is some money somewhere to fix it,” hoped Chelsea resident Debra Minor King,

Fun at Fire in the Foot Hills

Two Fat Men and a Grill, a team from Childersburg, this year’s Fire in the Foot Hills Grand-Champion of Bar-B-Q:... read more