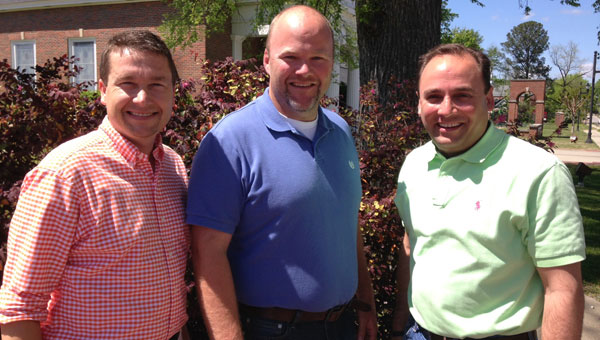 The second annual Scott Armstrong Memorial Scholarship Walk will be Saturday, May 10, 2014, beginning at 9 a.m. at the Columbiana Recreation Building on Washington Street. The 2.5 mile walk in historic downtown Columbiana is the signature fundraising event for the scholarship fund set up in Scott’s memory who died on May 19, 2011, of acute myelogenous leukemia at age 40.

The scholarship is given to a Shelby County High School senior from where Scott graduated. Walking in the event is free but any donation, no matter the amount, is welcome.

“Event sponsors will be located throughout Columbiana,” states the event flyer. “At the start of the walk, walkers will be given a map to follow that will lead to the sponsor’s tables. Walkers will get one entry in the final drawing for ‘door prizes’ for every sponsor they locate and ‘check in’ with.”

Scott was the son of Don and the late Virginia Armstrong. He loved fishing, hunting and Alabama football. He graduated from the University of Alabama where he was a member of the Million Dollar Band. He obtained his master’s in business at Delta State University where he coached girls softball, a sport he loved.

“Scott Armstrong was my very best friend in the world,” said Ellis. “My life is so much richer from knowing him and having him in it. The Scott Armstrong Memorial Scholarship is way for Scott’s love for, and generosity towards, other people to extend well beyond his short time here on earth. Every time we award the scholarship to a deserving student, I can feel Scott smiling down on us.”

Last year’s scholarship winner was Sarah Horton who attends Alabama and is a member of the MDB.