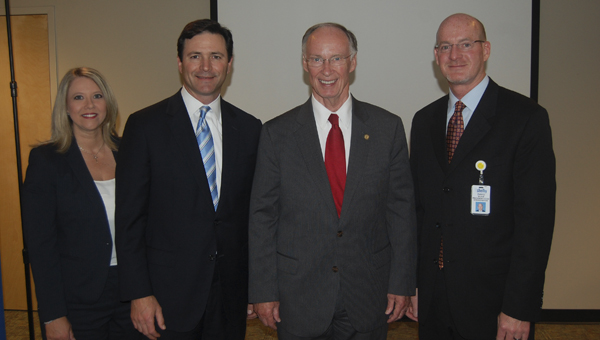 A press conference was held May 5 at Shelby Baptist Physician Center, where Gov. Robert Bentley lauded Virtual Alabama’s implementation. Shelby Baptist was Bentley’s second stop in Shelby County May 5. Earlier in the day, Bentley spoke with residents at McAlister’s Deli in Pelham as part of his Road to Economic Recovery Tour.

“It’s a privilege to be at Shelby Baptist in my home county of Shelby County,” Bentley said before an audience of local and state legislative delegates, as well as community and business leaders. “It’s good to be No. 1 and to be the first at some good things. This is something we can all be proud of.”

Virtual Alabama was created in 2005 in response to the devastation caused by Hurricane Katrina. The network allows K-12 schools, universities and now hospitals to share detailed infrastructure data with first responders in the event of a natural or manmade disaster.

A 10-minute video explaining how Virtual Alabama was played at the press conference. Through the network, Shelby Baptist personnel and first responders will be able to access safety plans, floor plans, emergency equipment and video surveillance cameras that aid in planning, responding and recovering from an incident.

Keith Parrott, president and CEO of Baptist Health System, said Virtual Alabama is a valuable tool to “protect and safeguard the lives of citizens.” Bentley agreed.

“Some of the most vulnerable buildings aren’t necessarily schools. Hospitals may be more vulnerable because there are so many people in and out,” Bentley said.

Virtual Alabama looks to continue its growth by safeguarding courthouses and government buildings.

When will the Alabaster thrift store reopen?

The America’s Thrift Store in Alabaster is closed for renovations, and will reopen in the next few weeks. (Contributed) By... read more