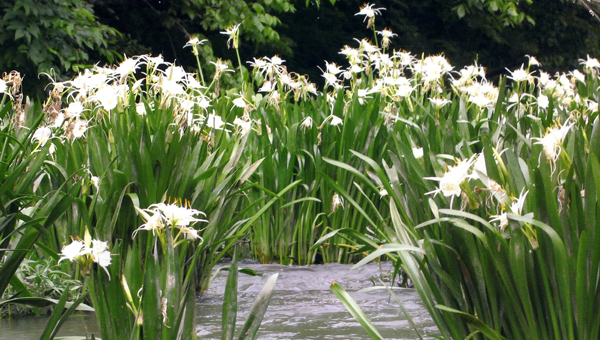 HELENA—Every year, usually between Mother’s Day and Father’s Day, visitors to Buck Creek and the Cahaba River are treated to the beautiful sight of the Cahaba lilies in bloom, and like clockwork, the lilies are preparing to bloom again.

Although well known in the area, Cahaba lilies are actually quite rare, and are only found in a few other places in America. Known by scientists as the Hymenocallis coronaria, the Cahaba lily or rocky shoals spider lily requires a very specific habitat in order to flourish.

“They like swift running water, their heavy bulbs are designed to sink into a rocky shore,” Cahaba lily enthusiast Chuck Allen of Cahabalily.com said. “They also like a lot of sunlight.”

Due to these specific environmental requirements, the lilies are only found outside of Alabama in parts of South Carolina, such as the Catawba River in Landsford Canal State Park, and areas of Georgia, and among these, the stand in Buck Creek is especially unique.

“The ones here in Buck Creek are the oldest documented stand around,” Helena historian Ken Penhale said.

Across the country the lilies typically start to bloom “in late April” and continue “through early June,” Allen said. Penhale explained the lilies in Buck Creek usually begin to bloom between “the second and third Sundays in May.”

Each flower opens one at a time, and each blossom lasts about one day, Allen said.

“Each one has their own day,” Allen said.

Due to the high water levels from heavy rain, the Cahaba lilies in Buck Creek may bloom a little later than usual this year, Penhale and Allen both said.

Since the lilies bloom in rocky river shores, one of the best ways to view the beautiful and unique blossoms is by canoe.

“One thing people love about them is their striking beauty,” Allen said. “(The flowers) are right there in the middle of the water, poking out of the rocks.”

Greystone Golf & Country Club will launch a $4 million renovation this summer in preparation for the Regions Tradition in... read more