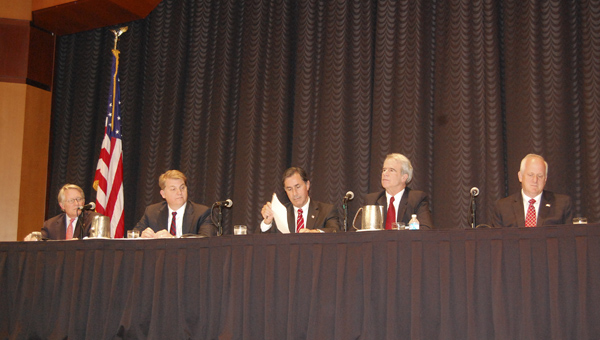 District 6 candidates Will Brooke, Chad Mathis, Gary Palmer, Robert Shattuck and Tom Vignuelle were on hand for a candidates forum at the Cahaba Grand Conference Center May 8 (Reporter Photo/Cassandra Mickens)

Will Brooke, Chad Mathis, Gary Palmer, Robert Shattuck and Tom Vignuelle were on hand to answer questions about their shared stances on key issues such as repealing Obamacare, curbing government regulations, enforcing term limits, creating jobs and combating the Common Core State Standards Initiative. Candidates Scott Beason and Paul DeMarco were not in attendance due to other commitments.

The candidates were clear about their opposition Common Core, which values consistent learning goals across states. The candidates agreed education should fall under local control.

“It’s going to standardize everything and basically be a race to mediocrity,” said Palmer said, chief development officer for the Alabama Policy Institute. Palmer added the initiative is “totalitarian in nature.”

Despite the shared views, there were a few barbs exchanged, specifically between Brooke and Mathis. With one of Mathis’ campaign mailers in hand, Brooke, a Harbert Management Corp., executive, dispelled claims that he does not reside in District 6. Brooke said he has always lived in District 6, but found himself in District 7 when the Alabama Legislature redrew congressional maps in 2011. Brooke bought a new home in District 6 in April.

Brooke said the mailer also alleges he supports abortion and he has no plans to repeal Obamacare if elected.

“All the things he alleges here are false truths. Don’t send people to Washington that will twist the truth,” Brooke said. “They’re guilty of the worst of the worst in D.C.”

Said Mathis, an orthopedic surgeon practicing in Alabaster: “It was quoted in every news story that you didn’t live in the district. That’s why it’s in the mailer.”

Palmer then prefaced his answer to a question by clearing the air.

“First of all, I live in the district,” Palmer said, drawing chuckles and applause from the audience.