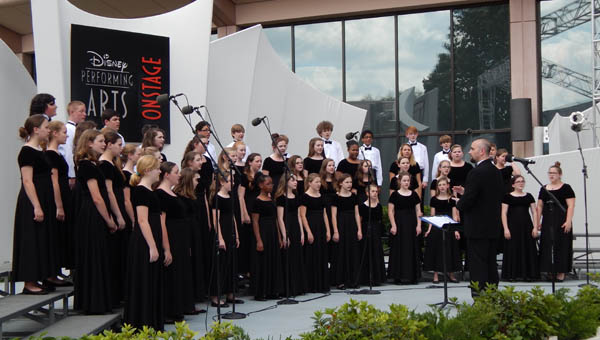 This was the third time in six years the Helena Middle School choir has made the trip Orlando to perform at Walt Disney World.

Leading up to the trip, the students worked hard to prepare a special six-piece program, which included “Banjo on my Knee,” “The River Sleeps Beneath the Sky,” “Elijah Rock,” “Agnus Dei” and the students’ favorites “Don’t Stop Believin’” and “Foot Loose.”

“We practiced after and before school to prepare,” Andrews said, estimating the choir logged nearly 15 hours of practice before the trip. “This concert was specifically for Disney.”

The day of the concert was hot, more than 90 degrees in outdoor Melody Gardens Theater, and the student’s were in full dress uniforms with girls in black dresses and boys in tuxedos, Andrews said. Even so, they put on a quality performance.

“It was great, the kids did a fantastic job,” Andrews said. “They had great composure and they sounded really good. I’m really proud of them.”

The trip gave the students hands-on experience with the entire performance process, from the preparation and practice stages through the concert day.

Additionally, it showed them the important responsibility that comes along with being performers. During the trip, the Helena Middle School students were “ambassadors for the school, the community and the choir program,” Andrews said.

A family of orphaned baby Downy Woodpeckers will be among the many young birds at the Baby Bird Shower hosted... read more