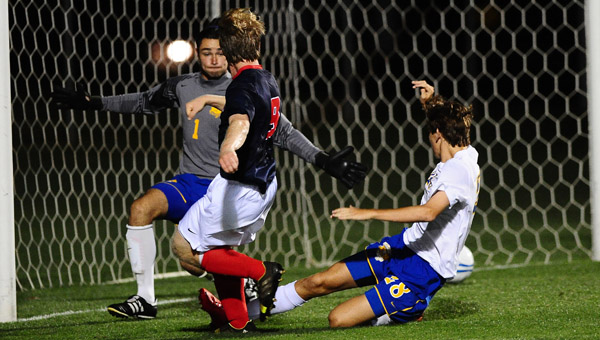 Oak Mountain’s Mark Green puts the first goal past the Fairhope goalkeeper during the May 9 game in Huntsville. (Reporter Photo/Jon Goering)

HUNTSVILLE— A stout defense and an opportunistic offense has taken the Oak Mountain Eagles soccer team to the AHSAA Class 6A state soccer finals. The Eagles secured their spot with a 4-0 win over Fairhope in the semifinals May 9.

The game opened with the Eagles applying offensive pressure in the Fairhope zone early. The Pirates’ defense held strong, but a Mark Green shot found the back of the net at the 28:04 mark in the game to put the Eagles up 1-0. Green was assisted by Patrick Carroll on the goal.

Carroll netted the next Eagle point, scoring with 5:36 left in the half to put Oak Mountain up 2-0. The Eagles had another scoring opportunity with under two minutes to go in the half, but a Tyler Luckett shot sailed over the goal.

Oak Mountain held strong, and took a 2-0 lead into intermission.

Green wasted no time in the second half to score his second goal of the contest, using a breakaway to put a shot past the Fairhope keeper with 37:21 left in the contest. Luckett earned a reprieve for the earlier high shot, netting a goal with 6:59 left to put the Eagles up 4-0.

Brad Louis and Thornton Henry combined for a shutout in goal, and the Eagles took home the 4-0 win.

With the win, Oak Mountain will face Vestavia Hills May 10, looking to avenge a tough 1-0 loss in penalty kicks last season in the finals.

Head coach Dan McMasters said the squad was looking forward to the opportunity, regardless of the opponent.

“We’ve been working all year to execute under the pressure,” he said. “We’re excited. You want to play the best teams in the state. It’s going to be a great game.”

The Eagles will face the Rebels at 3 p.m. at John Hunt Park in Huntsville.

Oak Mountain’s Julia Buckner fires a shot into the goal during the May 9 game against McGill-Toolen. (Reporter Photo/Jon Goering)... read more