A Victorian dream in Wilsonville

The Densler House in Wilsonville sits upon a small hill and shines of elegance with a Victorian style. 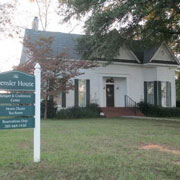 The house was erected in 1879, by William Tinney, a Wilsonville local craftsman, for then resident, John E. Densler. Mr. Densler was a prominent resident in the Wilsonville community, owning a local mercantile store and the train depot. Wilsonville was once the largest town in Shelby County, in-part due to the railroad.

After his wife Sarah’s death, in 1899, Mr. Densler sold the house in 1902. The home was purchased and sold three times until returning to the Densler family by way of Mrs. W.J. Weldon.  The house was occupied by the Weldon family from 1932 until 1965, when the Weldon daughters moved out of the area.  The house was closed for 35 years.

In 2000, Andrew and Diane Moore purchased the property.

“When we purchased the property, we restored it to its original architectural structure condition and design. The property was placed on the Alabama Register of Landmarks and Heritage in 2000,” Diane Moore said.

In the Densler home, we have the Hearts Desire Tea Room. Serving English afternoon tea since 2003.

“We celebrated our 10th year in business last year, and we keep getting surprised by the distances people will drive for tea,” she added. “I am so thankful to have a job that I absolutely adore!  It is a lot of work, but like they say, if you love what you do, it is never work.  I enjoy all the people that have come through our doors.”

The Moores specialize in teas, bridal showers, receptions and other events at the Densler house, which perches on a hill just beyond downtown Wilsonville and is an added value to the history of Wilsonville.

Mr. and Mrs. Moore also own two other properties in the area.

“The Columbiana Inn is our Bed and Breakfast and we also have smaller events there,” Diane Moore said. The 1890 Wedding Chapel is also historic.  It is located in Four Mile.”

More information can be found by visiting Columbianainn.com/ or calling 669-1450.