The South Shelby Relay for Life will remember cancer victims and honor cancer survivors on Saturday, May 17, 2014, from 10 a.m. to 10 p.m. on the Shelby County High School football field. One recent victim was Carol Horn Shurbet, a beloved member of the Columbiana community. 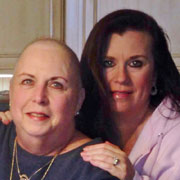 Shurbet was born on February 11, 1945, to the late Mayme and Yeager Horn and grew up in Columbiana with brother Howell. In 1963 she graduated from Shelby County High School where she was a majorette and voted “Most Popular” her senior year. One of the original Bama Crimson girls at Alabama, she was a Phi Mu and graduated with an elementary education degree. Her life was devoted to her family, friends, students at Bluff Park Elementary and church, Columbiana United Methodist.

The greatest battle of her life began in 2010 when diagnosed with breast cancer and continued in 2013 with pancreatic cancer. Her fight ended March 15, 2014, but not her life.

“I love the verse ‘I’ll see you in the morning,’ meaning we will all be reunited when we awake in heaven, the final stop in our journey by the grace of Jesus given on the cross when he died for all our sins,” wrote Shurbet before she died.

Shurbet had two children, Randall and Kelli, and seven grandchildren. During her final months she lived with her daughter, son-in-law Jeff and their five sons. She was blessed with many friends.

“My mother was an angel on earth,” said Kelli. “She loved with complete and utter selflessness, always more concerned for others more than herself. Mother had so many friends who supported us during her final months. I could not have made it without Judy Roberts, Beth Hedrick, Mary Louise Jones and the entire Dorough family. Her close childhood friends, Esta Meyers Kamplain, Mary Elliott Cobb, Marie Minor Lasher and Carol Harrison Smith were always there for her.”

“Carol had a huge heart to take care of people when they were needy,” said friend Smith. ”Her servant’s heart knew no end. Heaven only knows the count of those to whom she ministered.”