“Coming home from the hospital and preparing in one week for the Teen Miss Alabama preliminary (Chelsea) pageant was tough,” said Megan Armstrong, Chelsea resident and reigning Teen Miss Alabama. “But, I was determined, not necessarily to win, but to compete.” 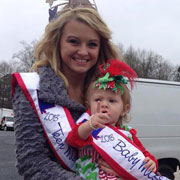 “Megan is a wonderful girl and has overcome some pretty big obstacles this past year,” bragged Megan’s mother Heidi Marimberga. “She has had some health problems but has continued to achieve her goals. I am proud to call her mine.”

Chelsea has had its own high school pageant for years. Megan was first runner up in Miss ChHS for 2014, but 2013 was the first year we had a pageant that was preliminary for Little Miss Alabama. The sponsor of our Chelsea pageant is Kristi Lael, owner of local business Family of Hair.

“We had seven age divisions from Baby up to Teen division and we sponsored the winner in each division to the Little Miss Alabama pageant,” said Lael. “It can cost us up to $1,800, but I really believe in it. Pageants helped me become more outgoing and built my confidence to become a business owner. I won second runner up in Mrs. North Carolina pageant and my granddaughter Mila is reigning Baby Miss Alabama.”

“Megan is a beautiful sweet girl and has fought some scary health problem,” said Lael. “She is going on to Alabama to study in their nursing program. We are proud of her.”

“Winning Teen Miss Alabama gave me the confidence I needed to continue to fight my illness,” said Megan. “This past year has changed my life. I am so thankful to the Chelsea Little Miss Pageant for sponsoring me. I have been blessed beyond measure.”