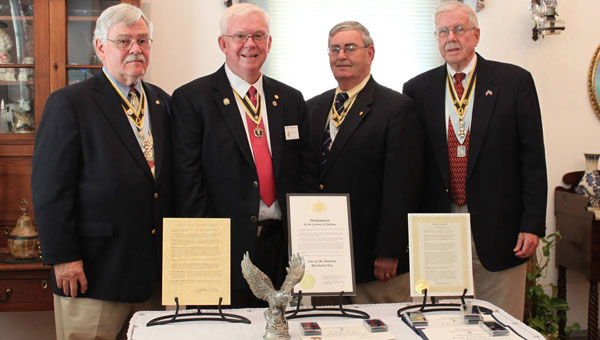 The National Sons of the American Revolution, known by the acronym SAR, was organized on April 30, 1889, and celebrated its 125th anniversary on April 30, 2014.

“SAR was conceived as a fraternal and civic society composed of lineal descendants of the men who wintered at Valley Forge, signed the Declaration of Independence, fought in the battles of the American Revolution, served in the Continental Congress, or otherwise supported the cause of American Independence,” states SAR origins on www.sar.org. “The SAR is a historical, educational and patriotic non-profit United States 501 c3 corporation that seeks to maintain and extend the institutions of American freedom, an appreciation of true patriotism, a respect for our national symbols, the value of American citizenship and the unifying force of e pluribus that has created, from the people of many nations, one nation and one people.”

The Alabama Society SAR was organized on February 18, 1890, and will celebrate its 125th anniversary in February 2015.

Led by State President Bobby Joe Seales, charter member and past president of Shelby County’s Cahaba-Coosa Chapter, the Alabama SAR presented three proclamations to the National SAR at its spring board of managers meeting on April 26, 2014, held at the Shelby County Museum and Archives in Columbiana.

The proclamations issued by the city of Columbiana signed by Mayor Dr. Stancil Handley, Shelby County Commission signed by Chairperson Lindsey Allison, and State of Alabama signed by Gov. Robert Bentley, proclaimed April 30, 2014 as Sons of the American Revolution Day. Gov. Bentley and Commissioner Dan Acker are active members of the Cahaba-Coosa Chapter.

Attending the meeting were distinguished guests who all have received the SAR Minuteman Award, the highest award presented to a member of the National Society SAR.