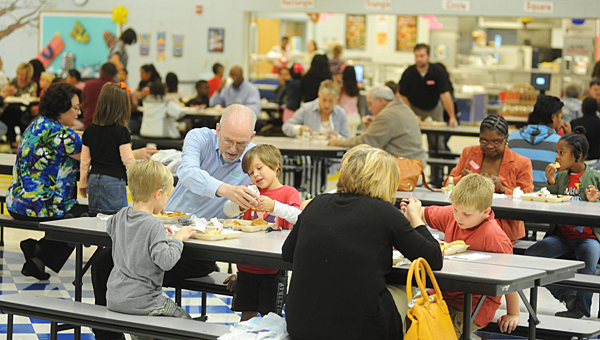 Alabaster schools will not turn away children who don’t have money in their accounts through a policy approved by the School Board on May 12. (File)

Children who show up in the breakfast or lunch lines in Alabaster schools without money in their accounts “will not be turned away” under a policy approved by the city’s Board of Education.

The board voted unanimously during its May 12 meeting to approve its meal charge procedure and outline the program in its student handbook. Through the policy, no child will be denied a hot breakfast or lunch due to lack of funds in their lunchroom accounts, said ACS Child Nutrition Director Heather McDermott.

McDermott said ACS has followed the same procedure throughout the past school year, but requested the School Board to make the policy official during the May 12 meeting.

“It has become the practice in Alabaster City Schools,” McDermott said. “Basically, the state says we can’t turn away kids in kindergarten through third grade. I think we owe it to kindergarten all the way through 12th grade.”

McDermott said the procedure does not cover snacks outside of normal school meal times, and said the school will make efforts to notify parents of low or negative student cafeteria account balances.

“The principals work hard to make sure the parents know their balance is low,” McDermott said. “What we do is send a letter home with the amount owed, along with a free and reduced price lunch application.”

“I appreciate the procedure for every child,” Board of Education member John Myrick said. “We have some adults who will try to beat us, but it’s not the child’s fault.”

McDermott said she didn’t support penalizing a student due to lack of funds in their accounts.

“I feel if you take a lunch away from a child, you’re punishing them for something they have no control over,” McDermott said. “We just want to make sure these kids get fed.”

FROM STAFF REPORTS MONTEVALLO—The Student Publications Committee at the University of Montevallo recently announced the selection of editors of UM’s... read more