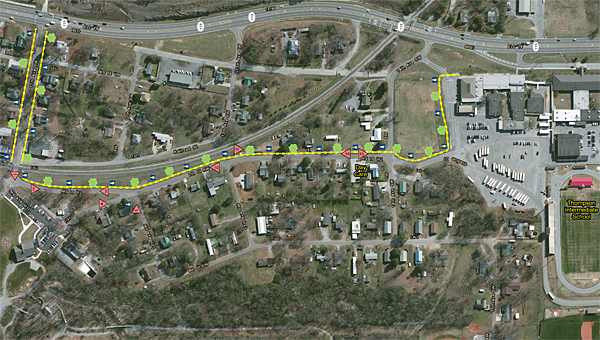 Alabaster applied for a grant to possibly fund sidewalks along Seventh Street Southwest and 11th Avenue Southwest during its May 12 meeting. (Contributed)

The Alabaster City Council reversed its original decision on applying for a grant to possibly fund sidewalks between Alabaster City Hall and Thompson Intermediate School during a May 12 meeting.

The council voted during the meeting to authorize the Goodwyn Mills and Cawood firm to submit a grant application to the Alabama Department of Transportation for a federal Transportation Alternatives Program grant.

Alabaster City Manager George Henry previously said ALDOT will not award the Transportation Alternatives Program grants until November, and said the sidewalks will not be constructed until spring 2015 if Alabaster receives a grant.

The council voted unanimously during the May 12 meeting to apply for the grants. During a May 2 meeting, the council was split 3-3 on the matter, with council members Bob Hicks, Stacy Rakestraw and Council President Scott Brakefield voting in favor of applying for the grant and Council members Sophie Martin, Rick Walters and Tommy Ryals voting against.

Councilman Russell Bedsole was absent from both meetings due to work obligations.

After voting against applying for the grants during the May 2 meeting, Martin, Walters and Ryals said they were uncomfortable supporting the grant application without a comprehensive plans for the proposed sidewalks.

During the May 12 meeting, Martin, Walters and Ryals said the city solidified plans for the proposed sidewalk project over the past few weeks.

“It’s more definitive now. We have a more solid idea of where those sidewalks will be placed now,” Martin said during the meeting.

Ryals and Walters shared similar thoughts on changing their votes.

“It was amended to what I believe is a more acceptable plan,” Ryals said.

If Alabaster receives the grant, the sidewalks will run on both sides of 11th Avenue and along the north side of Seventh Street Southwest before traveling north to the front of Thompson Sixth Grade Center.

Gabe Griffin, who celebrates his ninth birthday May 13, has Duchenne Muscular Dystrophy, a disease that causes muscle weakening over... read more