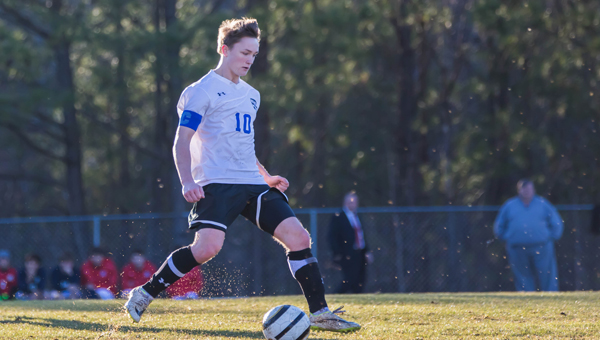 Chelsea senior Will Bevill set the school record for games started in a varsity career with 118, including a streak of 46 consecutive games from March of 2011 to February of 2013. (Contributed/Ron Potts)

One wrong turn of a cleat, small lapse in concentration or error in judgment of a tackle can yield disastrous results.

Which is what makes Chelsea’s Will Bevill’s career so impressive. The senior has set the school record for games started in a varsity career with 118, including a streak of 46 consecutive games from March of 2011 to February of 2013.

“He’s been huge for us,” head coach Lee Miller said. “(For) half a decade. He’s a guy that always wants the ball.”
Miller said he noticed something special about Bevill right away.

“When he came out to our tryouts in August of 2009 (for the 2010 season) as an 8th grader, I was hopeful that he would be a centerpiece for our JV team,” Miller said. “However, he was so impressive, I felt he was worthy to play for our varsity right away.”

Thus began the record setting career. Miller said Bevill faced injuries throughout his career, but his toughness kept him in the lineup.

Bevill said he never gave much thought to records, just the desire to play.

Miller said the final game of Bevill’s career exemplified his toughness. After having his foot stepped on, Bevill had to be taken out of the game —but not for long. He was back in the game by the end, trying to help the Hornets get back into what ended up as a 3-0 loss.

Bevill —who is headed to Itawaba Community College in Fulton, Miss., next season, said he wasn’t trying to do anything out of the ordinary.