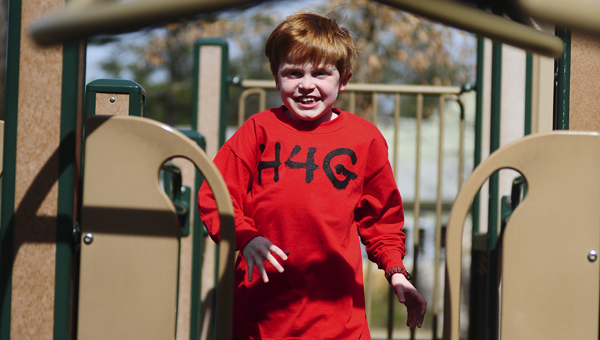 Gabe Griffin, who celebrates his ninth birthday May 13, has Duchenne Muscular Dystrophy, a disease that causes muscle weakening over time. Two men on a mission to raise money and awareness for the disease will bike from Astoria, Oregon to Mobile in June. (Reporter Photo/Jon Goering)

BIRMINGHAM — Two men on a mission to raise money and awareness for a rare disease that robs its young victims of muscle function will bike about 3,200 miles from Astoria, Oregon to Mobile starting in June.

Michael Staley and Wes Bates will kick off their ride, called Ride4Gabe, June 28. The long-distance cycling enthusiasts were moved by the story of just-turned 9-year-old Gabe Griffin of Birmingham. Gabe, who lives along U.S. 280 in Shelby County, has Duchenne Muscular Dystrophy, a disease that causes muscle weakening over time.

Gabe’s parents, Scott and Traci Griffin, founders of the Hope for Gabe foundation, formally announced Ride4Gabe May 13, which also marks Gabe’s ninth birthday. The ride, they say, is “the gift of a lifetime.”

Staley, chief of staff for U.S. Rep. Spencer Bachus, and Bates, an Indiana University student from Aurora, Colorado, will ride about 75 miles each day and eventually cross Alabama from north to south, finishing the ride in Mobile in mid-August.

Both men said they are passionate about educating the public about Duchenne, which affects one in 3,500 boys. A child diagnosed with Duchenne will likely be in a wheelchair by age 12, and will die from the disease in his late teens or early 20s. Currently, there is no cure for Duchenne or any U.S. Food and Drug Administration-approved treatments.

“At the age when a little boy begins to fully develop into a man with strong muscles, Gabe is going to be experiencing the exact opposite,” Staley said. “Wes and I feel led to educate people about this disorder and we believe that Duchenne can be stopped and Gabe’s life can be saved. We are asking community leaders and cyclists in each city and state along our route to get involved.”

Staley first met the Griffins one year ago when the Griffins visited to Bachus’ office in Washington, D.C. The Griffins were in Washington to push for the FDA’s approval of the drug eteplirsen, which Duchenne researchers say slows the progression of the disease, but doesn’t reverse it. More than 100,000 signatures were collected on a White House petition to accelerate FDA approval of eteplirsen through The Duchenne Alliance’s Race to Yes campaign.

It was an impromptu meeting between Staley and the Griffins that set plans for the ride into motion.

“I was out in the hall in front of the office and this little red-headed kid came up to me and said, ‘Are you Spencer Bachus?’ I said, ‘No,'” Staley recalled.

“I saw Gabe’s parents coming down the hallway and we sat down in the office and they told me about Duchenne. It touches your heart when you hear their story and I’ve fallen in love with the story of Gabe and the fight of the Griffin family to save their son’s life.”

Said Scott Griffin: “Michael and my family have become really good friends and Michael decided he wanted to do something for Gabe. Traci and I live every day trying to help ‘fix’ Gabe’s problem. Our community has rallied around our efforts, and we are ready to take our message across America through Ride4Gabe.”

Staley, Bates and their small support team will raise money to advance current research. To ensure the majority of the money goes to research, the Hope for Gabe foundation is requesting donations of a motor home and SUV for the ride, as well as camping gear, cycling gear, food and assistive technology to guide and safeguard the cyclists.

Police respond to wreck with injuries on Helena Road

Pelham Police responded to a vehicle collision, injuring two, at the intersection of Helena Road and Wooddale Drive. (Contributed) FROM... read more