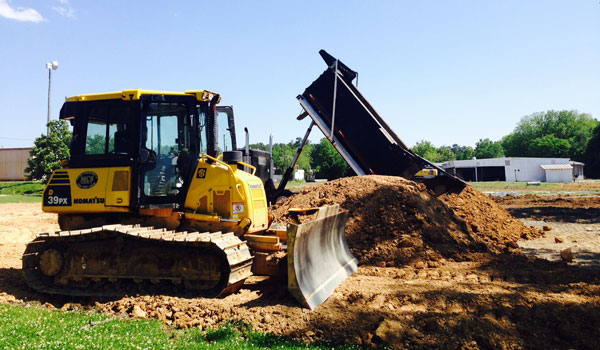 COLUMBIANA—The City of Columbiana “turned dirt” on property where the summer Classics furniture factory once stood before a fire damaged the building in 2004.

The city held a naming contest for the property, which will soon be a park, in which over 40 Columbiana citizens submitted ideas for a new name.

The city’s beautification board selected three finalists from the suggestions, and the public will vote on the best name in the coming weeks.

“When they finish, the site will be ready for the next stage,” Handley said.

Once the park is complete, amenities such as a basketball court, outdoor amphitheater with tiered seating for outdoor performances, an open air pavilion, bathrooms, seating and other park facilities will be included.

Handley said he was “reluctant to set a timeline” as the city will do the project in phases as “money becomes available.”

The City of Columbiana partnered with Shelby County for some of the demolition and site work, and the city is “currently seeking grants and other aid,” Handley said.

“This piece of property has set in our downtown area since it burned and it’s a blight in our community right in the downtown area,” Handley said. “We hope to transform it into a beautiful park that all our citizens can enjoy on a daily basis.”