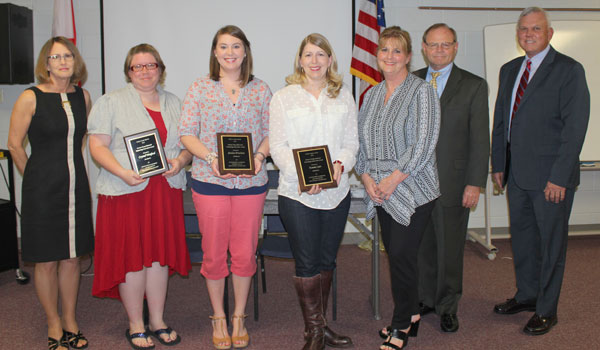 Three teachers will be the first recipients of the new Shelby County Schools Owens-Young Memorial Technology Innovation Award.  The award recognizes teachers who excel at using technology to improve teaching and learning. The district plans to make this an annual event in order to promote leadership in the area of 21st century teaching.

The 2014 winners, Jordan Pritchett of Montevallo High School, Tammi Carr of Oak Mountain Intermediate School and Crystal Watford of Helena Middle School, were selected from entries across the district. They were nominated by their peers, students and administrators for the award. Each will receive an iPad and a trip to the International Society for Technology in Education Convention in Atlanta this summer. The district will also submit nominations on their behalf for the state’s Chiquita Marbry Memorial Technology Innovation Award, presented each June at the Alabama Educational Technology Conference in Birmingham.

Just as the state award is named for a former leader in the area of educational technology, the Shelby County award honors two former employees whose work paved the way for teachers to use technology in the classroom. Denise Owens, who taught in Shelby County Schools for 22 years, became one of the district’s first technology resource teachers in 1998.  Her work helped hundreds of teachers to design innovative lesson plans using a wide range of technology. Owens retired in 2000 and passed away in 2007.  Robby Owens said he appreciated his late wife’s work being honored in this way.

Michael Young, a computer programmer who came to work for Shelby County schools in 2007 as a network technician, also made an impact in the classroom.

“Without access to the type of friendly, individualized technical support that Michael provided to teachers and students, a great lesson plan can just come to a screeching halt,” said Susan Poling, the district technology coordinator. “Being innovative in the classroom takes a team. Obviously it takes a creative teacher, willing to try new things and work through the bumps, but it also takes supporting ‘players’ like Denise and Michael who can introduce those teachers to new techniques and give them the technical assistance that they need.”

“Michael loved working for the teachers and loved all the students. I am so proud of what he did and happy that he will be remembered in this way,” said Janice Young, Michael’s wife. Michael Young passed away in January of 2013.

“Denise and Michael contributed greatly to our technology program. We’re happy to establish this award to recognize their past contributions, the hard work our teachers put into being 21st century educators, and the teamwork that success in this arena takes.” Susan Poling said.

By GINNY COOPER / Staff Writer COLUMBIANA—Cheryl Naugher was unanimously approved as coordinator of finance and accounting by the Shelby... read more