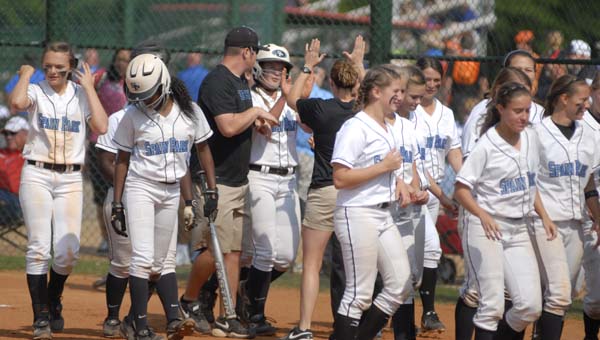 MONTGOMERY — The Spain Park Jaguars softball team’s season came to an end in heartbreaking fashion, as a walk-off single by the Hillcrest-Tuscaloosa Patriots put the Jags out of the AHSAA Class 6A state championships May 17.

The Jaguars earned the right to face Hillcrest after beating Hoover 15-1 on May 16 in an elimination game.

Spain Park added another run in the top of the fourth when M.K. Bonamy crushed a home run over the centerfield fence to put the Jags up, 2-0.

Hillcrest singled to open the inning, scoring two batters later to tie the game at 2-2. Again Spain Park tightroped out of danger, ending the inning with the bases loaded.

Spain Park appeared to take control of the game in the top of the eighth. Julianna Cross singled to open the inning, and Anderson followed suit with a bunt. A sacrifice fly by Mary Katherine Tedder moved both runner over, and Cross scored on a wild pitch to take the lead. Bonamy singled to left to bring home Tedder, and the Jags took a 4-2 lead headed into the bottom of the eighth.

Unfortunately for the Jags, the lead was not enough. Hillcrest added three runs in the bottom frame, including the walk-off single to end the game. 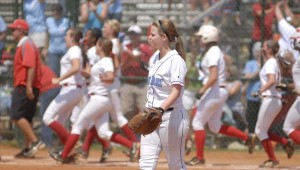 Spain Park pitcher Julie Knight walks off the field after Hillcrest-Tuscaloosa used a walk-off single to knock the Jaguars from contention at the AHSAA Class 6A state championships. (Reporter Photo/Drew Granthum)

While the journey came up short of the intended goal, head coach C.J. Hawkins said she was proud of the team’s effort.

“They played with their hearts,” she said. “That was a really good team, and we just came up short. This team has been resilient all year, and they have so much heart. They really genuinely love playing with each other. It’s been an honor and pleasure (to coach them).”

In the circle, Sisson went 7.1 innings, giving up three earned runs on nine hits with two walks and three strikeouts. Julie Knight pitched 1/3 of an inning with no earned runs on two hits.

The Jaguars finished with 49 wins and 17 losses on the year.

Pelham’s Katie Lively struck out four in an elimination game loss to Baker in the AHSAA state championships May 16.... read more