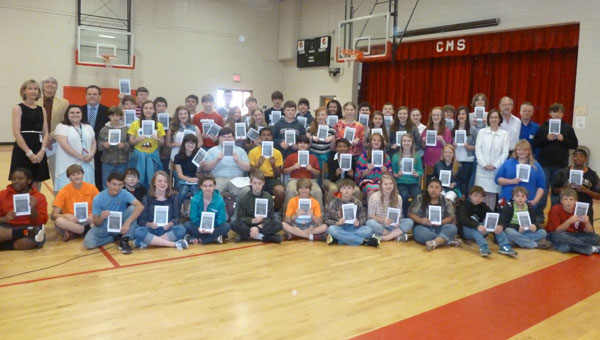 Four the last four years, the Shelby County Arts Council, in collaboration with the Alabama Writers’ Forum and the Shelby County School System, have brought the program “Writing our Stories” to CMS, the only public school in Alabama to have this pilot program.

Led by highly acclaimed poet, children’s author and winner of the Yale Poets Award, Crunk teaches students to believe in themselves that they can write. And they do.

“I want the students to be more open and comfortable with their writing skills,” said Crunk. “For me, it is fulfilling process to spark and inspire a student’s mind.”

SCAC won the 2013 Impact Award from the Alabama Alliance for Arts Education for this program, “given to an organization for outstanding commitment and dedication to children and the arts for innovative and creative programming, curriculum, teaching and/or presenting.”

SCAC is committed to bringing the arts to Shelby County student and adults in as many ways as possible to enrich our community.

“Research confirms that participation in arts programs such as this significantly enhances students’ overall academic skill,” said Crunk. “More importantly, students gain practice, and confidence, in using creativity as an invaluable life-skill. The writing process, by which we imagine a goal and work toward it, while discovering and exploring new possibilities along the way, is a rich model for living a rewarding, fruitful life.”

Music on Main brings art to the streets May 23

Artists Jerry Roldan and Edna Sealy are known for their work at the Shelby County Arts Council, are pictured at... read more