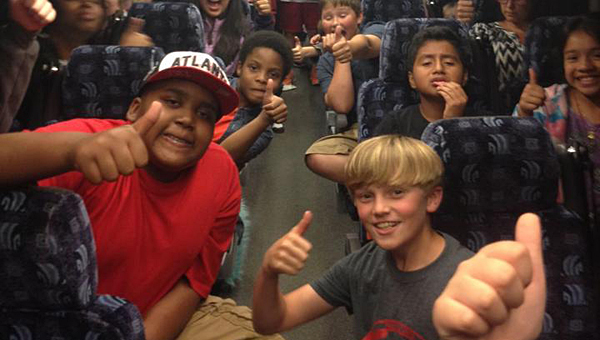 Thompson Intermediate School students give a thumbs up on their way home from a May 15 field trip to Chattanooga. (Contributed)

ALABASTER – It took a group of Thompson Intermediate School students a little longer than they originally planned to return to Alabaster on May 15 after their charter bus was involved in a minor wreck.

About 200 TIS students who weren’t on the school’s Washington D.C. trip took a field trip to Chattanooga, Tenn., on May 15. While returning to Alabaster, one of the five charter buses carrying students was involved in a minor wreck, Alabaster School Superintendent Dr. Wayne Vickers said during a May 19 interview.

“It was just a situation where a charter bus was in a little fender-bender,” Vickers said, noting there were no injuries in the wreck. “It was a very tough situation.”

As a result of the wreck, the bus was delayed by a few hours, requiring the buses to stop for dinner at a Burger King in Fort Payne, Vickers said.

“It took Burger King a little longer than expected to feed our 200 kids. They are pretty happy!!!” read a May 15 post on the Alabaster City Schools Facebook page.

After stopping for dinner, the five charter buses returned to the school – where many anxious parents were waiting – at about 11 p.m. Before the kids arrived at the school, Vickers went “car-to-car” at TIS to “reassure parents their children (were) safe, fed and will arrive home soon,” according to a post on the ACS Facebook page.

Vickers praised the school system’s central office staff, and said they helped to comfort parents and make the best out of a difficult situation.

“We had a hard-working team of teachers, coordinators and school administrators who got everything worked out,” Vickers said. “We were just glad that after all that went on, we were able to get the kids home safe and sound.”