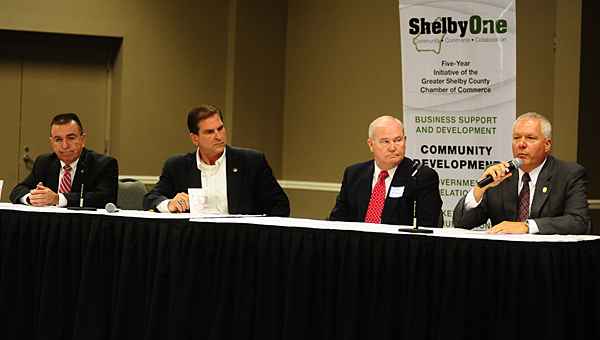 The four candidates for the Shelby County sheriff’s seat proposed plans ranging from arming some school personnel to making physical changes to the county’s school buildings during a May 21 forum in Pelham.

Candidates Kip Cole, Larry McDow, Rick Needham and John Samaniego answered a slew of questions during the forum at the Pelham Civic Complex, which was sponsored by the Greater Shelby County Chamber of Commerce, the Shelby County Republican Party and Shelby County Newspapers, Inc.

Cole said he would support the continuation of the school resource officer program, in which a Shelby County Sheriff’s Office deputy is stationed at all Shelby County schools in unincorporated parts of the county.

“Partnerships and relationships are key to the successful resolution or prevention of a critical situation in our schools,” Cole said.

McDow said he would work with Shelby County School Board officials and principals to come up with a “comprehensive plan” to handle potentially dangerous school situations, and said he would include students and parents in the process.

“When we think school safety, we immediately think school shootings,” McDow said. “But there are also drug sales, thefts, assaults, bullying and cyber-bullying. Those issues need to be addressed.”

Needham said making all schools gun free zones “doesn’t make common sense,” and said he would like to initiate a training program to arm some school personnel “much like the Air Marshal program.”

You don’t know who is armed. You just put a sign on the door that says ‘armed personnel on site,’” Needham said. “If they know armed guards are in the school, that will take it to about a 99.9 percent certainty (that a potential shooter won’t enter the school).”

Samaniego said he would work to continue the Shelby County School System’s plan to physically increase security in all school entrances, and said the school resource officer program helped to bring a peaceful conclusion to an armed hostage situation at Chelsea Middle School in 2013.

“We have got to stay vigilant,” Samaniego said. “The sheriff’s Tactical Response Unit has gone out and mapped out every school in the county in the event that there is a serious situation.”

The four candidates are looking to succeed current Shelby County Sheriff Chris Curry, who is not seeking re-election. The race will be decided during the June 3 Republican primary election.

The Boys and Girl Club of Montevallo will host summer programs for kids ages 6 through twelve (contributed). By GINNY... read more